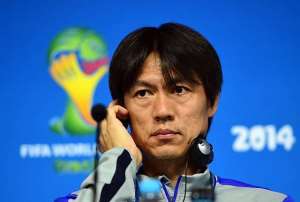 Hong's team sit bottom of Group H with just one point and head into Thursday's match against leaders Belgium at Arena Corinthians in Sao Paulo with slim hopes of advancing to the knockout phase.

The Asian nation (one point, -2 goal difference) have to beat Marc Wilmots' side if they are any chance of reaching the next round, while they will be hoping for a draw between Algeria (three, +1) and Russia (one, -1).

Despite four games without a win and facing an uphill task to make it out of the group, Hong has not given up hope.

"Our players up until now have done their best, and that is the attitude that we have had, but, we have to see to what extent that will play out," the 45-year-old said.

"We know that the Korean people want this, we will do what we can and I don't know if we can call it a miracle but we will have to wait for the results.

Hong added: "In the case of football, it doesn't necessarily mean the strongest team will always win.

"So, that's what we are preparing for and so even though it is our last game, we can hope, and I don't think that anybody can predict what will happen in the match.

"Our players will continue to do their best, even in the match against Belgium."

Hong has also rushed to the defence of forward Park Chu-young, who has been heavily criticised for his performances in Brazil.

The Arsenal player was labelled as the squad's "biggest disappointment" by former Korea coach Kim Ho.

"It's important to have him for the overall balance in our team," he said.

"In the first game, I don't think that he played that poorly. In the second match, I think that we didn't make enough chances, and also in addition to that, our defence wasn't strong so we conceded goals and that's what led to our defeat.

"I think that Park Chu-young, in the middle, he is the one who creates a balance in the overall team so in that way he has fulfilled his role, but I don't think we have made enough chances for him to score."