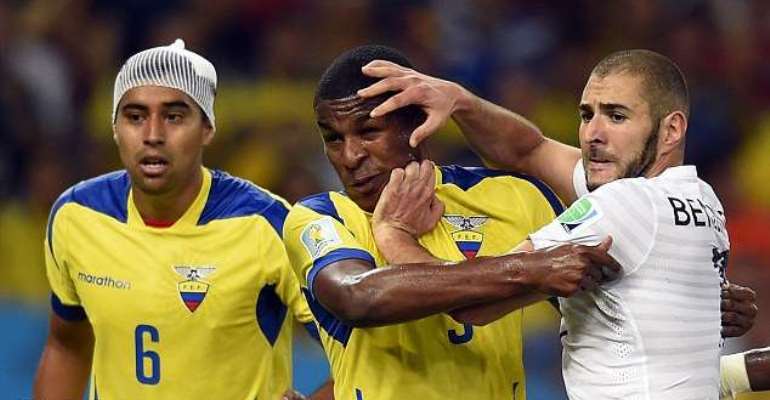 Ecuador have been knocked out of the World Cup after drawing 0-0 with France in today's Group E decider in Rio de Janeiro.

Les Bleus enjoyed much of the early possession at the Maracana, with Antoine Griezmann shooting low and wide from distance in the 11th minute.

Shortly afterwards, midfielder Moussa Sissoko swiveled to connect with a dangerous volley that flashed towards goal, but Ecuador goalkeeper Alexander Dominguez was able to save.

Midway through the first half, Ecuador were lucky to escape after a threatening ball from Bacary Sagna skimmed off Karim Benzema's head in front of goal.

Paul Pogba was then responsible for arguably the best chance of the half eight minutes before the break, as he sent a thumping header flying towards the Ecuador top corner, but Dominguez was able to tip the ball over the post.

Just after the restart, the Ecuadorian stopper had to be at his best once again to stop a Griezmann effort, acrobatically tipping the ball over the post.

The South American outfit then found themselves with a mountain to climb just four minutes into the second half, as captain Antonio Valencia was sent off for a studs-up tackle on Lucas Digne.

Nevertheless, Ecuador still threatened, with Cristhian Noboa slipping when well-placed in front of goal and slicing the ball wide in the 55th minute.

Midway through the second half, France spurned a chance to take the lead when Pogba, despite having plenty of space in a dangerous position, proceeded to nod the ball across the Ecuador goal and out for a goal-kick.

In injury time, Les Bleus had another golden opportunity to draw first blood and qualify with a 100% record, but Pogba was once again thwarted by Dominguez.