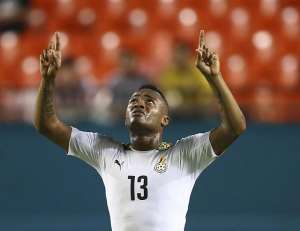 Saido Berahino and Stephane Sessegnon were the club's top scorers last year on just five league goals. Albion struggled to score all season and need to bring in a striker who can propel them up the table. Jordan Ayew from Marseille would be a good option.

His agent has recently said Ayew is attracting interest from Premier League sides and he is set to leave France. He is currently playing for Ghana at the World Cup and has already made a big impact. He helped change the game after being brought on when his side was losing. His pace frightened the German defence and he linked up well with team mates.

However, he has since come out and apologised to the public for shooting instead of squaring the ball to a team mate which would have seen Ghana win the game. But as a striker being greedy could be a good thing. It shows his desire to find the net and improve his own goal tally. The type of striker the club has not had since Peter Odemwingie, Albion's all-time leading Premier League goal scorer.

Ayew is the son of Ghana legend Abedi Pele and his brother, Andre, also plays for Ghana and Marseille.

He has scored only 14 goals in 111 games for Marseille, but has been forced to play on the wing because of his pace and sometimes limited to substitute appearances. He does look set to be on his way out of Les Phoceens after being loaned out for the remainder of the season in January. He scored five goals in 17 appearances for Ligue One rivals Sochaux.

Another option for West Brom could be Bafetimbi Gomis. He will demand high wages but the club will save on a transfer fee, after his release from Lyon where he refused to sign a new deal.

He is more of a goal scorer than Ayew, but will offer something different. He is strong and will hold the ball up. He is good in the air and is a physical striker but his style of play could be too similar to Victor Anichebe.

Gomis cost Lyon 13 million euros from St Etienne and scored 62 times in 172 games before his release. The French international has been attracting the likes of Newcastle in the past, but Albion have shown they can compete with other teams in England when they captured Joleon Lescott from Manchester City.

If chairman Jeremy Peace is prepared to pay some money, Ayew would be a good option because he offers something different. The blistering pace will scare strikers, like it has at the World Cup. He is 22 years old so has time to develop his game and adapt to the Premier League. Albion would also benefit from having Gomis at the club, but will have to pay big wages and control a player who could cause problems behind the scenes.