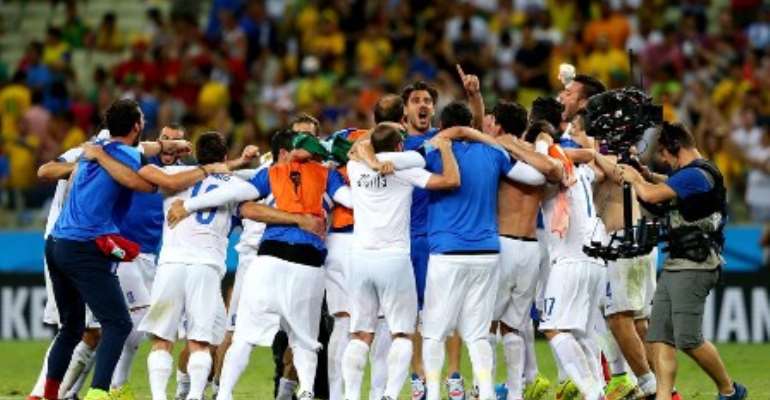 The Ivory Coast aim of progressing to the next phase of the 2014 FIFA World Cup was dashed yesterday at the Estadio Governador Placido Aderaldo Castelo in Fortaleza when Giorgio Samara's extra time penalty snatched a victory for Greece.

Swansea City's Wilfried Bony cancelled out Andreas Samaris first half lead on the 74th minute to give the Elephant some hope of advancing but the Greeks fought back in time added on to grab the three points at stake.

With black armbands on to show solidarity to brothers, Yaya and Kolo Toure in memory of their younger brother, Ibrahim Toure who passed on about a week ago the match turned out to be an emotional occasion for the Ivorian's as they struggled to make impact in the first half.

The two Coaches made one change to their starting line-ups with former Chelsea forward Didier Drogba starting for the Elephant whiles 37-year-old Georgios Karagounis playing his 138th cap in place of suspended captain Konstantinos Katsouranis for the Greeks.

The Greeks made their presence felt in the 30th minute when Jose Cholevas struck a powerful shot against the bar. Another chance came a few minutes later but Karagounis shot straight at goalkeeper Boubacar Barry.

Greece took the lead in the 42nd minute when Andreas Samaris took advantage of Cheick Tiote's back pass blunder and put one past Barry. Yaya Toure tried to put Ivory Coast on level before the first half but Samaris blocked his effort.

The Greeks came back from the break more hungrier with Karagounis rattling the bar from 40 yards away. Ivory Coast responded quickly but Souleyman Bamba's header missed the post by an inch.

The Elephants came to level in the 74th minute when star man Gervinho set Wilfried Bony to score his second goal of the tournament and to give the Ivorian's some hopes of qualification.

The Greeks did not went to sleep but fought back strongly to the end and were awarded a penalty in time added on when Giovanni Sio was wrongly adjudged to have impeded Samaras in the box.

Samaras stepped up to give the Greeks who started the competition poorly the lead from the spot and also progressing to the next stage as the best second team in Group C after leaders Columbia.

Teachers Are Better Off Under NPP Than NDC — Education Minis...
40 minutes ago

COVID-19 Still With Us, Follow Protocols – Okoe Boye To Ghan...
48 minutes ago