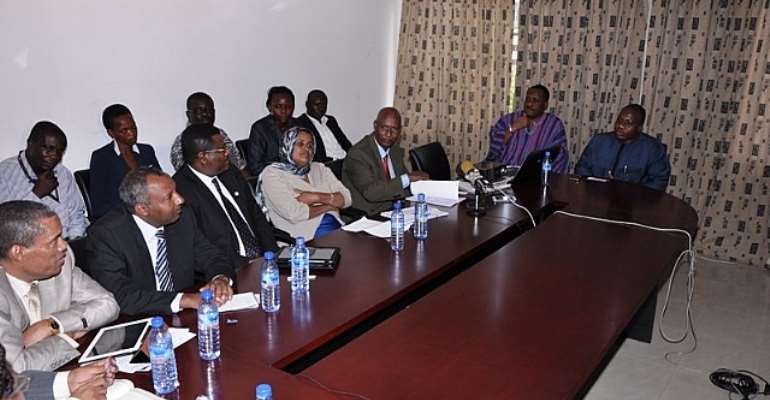 Mr. Ayariga in a discussion with the delegation
Accra, June 23, GNA - Mr Mahama Ayariga, Minister of information and Media Relations, has called on the citizenry to build their capacities in the use of social media, since it is a good platform for building interactions for development.

He said when people pay attention and pick up the requisite skills as well as the knowledge that comes with social media in the dissemination of information, it helps a country not only to thrive in democracy but in central and economic development.

Mr Ayariga made the remarks on Monday when an eight-member delegation from Ethiopia on a study tour paid a courtesy call on him in Accra.

He noted that the democratic growth of Ghana could be traced to as far back as 1992, when leaders strongly believe in free and independent media which has been a tool to Ghana's rich central democracy.

'Leaders viewed the dissemination of information to central success, hence the free flow of information being central to the efficiency of political systems and improvement of social issues in Ghana', he said.

Mr Ayariga observed that as a result of free press and free expression enshrined in the 1992 Constitution media houses in the country operate freely without setbacks from anyone.

He, however, challenged the delegation to study the rich culture of Ghana's press freedom and emulate it in their country to boost the long standing friendship history that exist between the two countries for better collaborative work efforts.

Mr Hadush Kasso, Director of Communications and Media Research as well as Head of the delegation said they are in Ghana to acquaint themselves of information dissemination, information management as well as free press and the proper usage of social media in helping position Ethiopia's media at the forefront like Ghana.

He added that it is the hope of the delegation, to achieve the reality of their working visit which was in the direction of bridging the gap and also broadening their knowledge on democratic institutions as well as free judiciary that would help boost the cooperation and friendship of the two countries on bilateral basis.

'We are also ready to adopt the best different media practices of Ghana to make Ethiopia's media also worthwhile', he said.

He hailed Ghana for not only setting herself apart in democracy but also in information dissemination through all positive means.

A presentation on information management architecture was held for them as part of programmes lined up for their study tour. GNA EN-GB X-NONE X-NONE