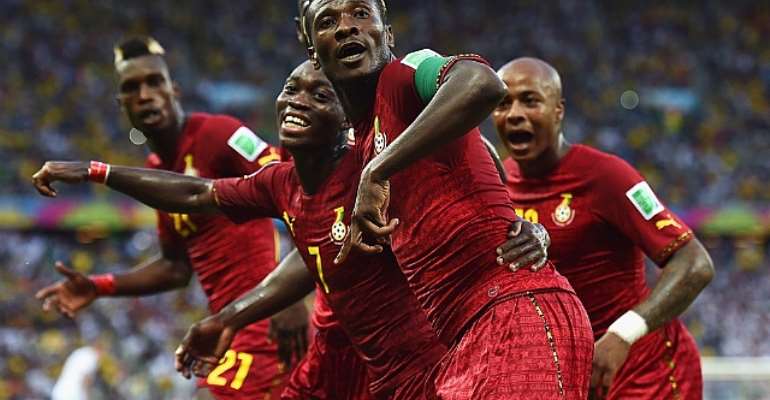 Asamoah Gyan of Ghana celebrates scoring with his teammates

After losing painfully to USA in his first group game at the 2014 FIFA World Cup, head coach of the senior national team, the Black Stars, James Kwesi Appiah has indicated he has learnt from the defeat to the Stars and Stripes.

Ghana suffered a 2-1 loss to the Yanks last Monday at the Estádio das Dunas after dominating the game, which was highly entertaining at the 45,000 capacity stadium.

The Black Stars, who were hoping to secure a third straight win over their American counterparts after winning all two previous meetings, thus 2006 and 2010 respectively, saw their efforts hit a jolt after Jürgen Klinsmann's men achieved the revenge they had been anticipating.

But the Ghanaian tactician, who has been under a lot of criticism after the loss, says he had learnt from the defeat and promised a positive results against Germany on Saturday, as was witnessed when the two sides fought to an entertaining 2-2 draw.

“I have learnt a lot, considering the fact that when you create chances and you are not able to finish, it comes down to whether your midfielders or strikers are doing the right thing at the right time,” Appiah said.

“We need to go back and see our mistakes and correct them. We're going to have to play well against Germany and I know we'll give them a good game,” Appiah stated before the game.

A loss to the Die Mannschaft on Saturday would have seen Ghana bow out of the Copa Mundial .