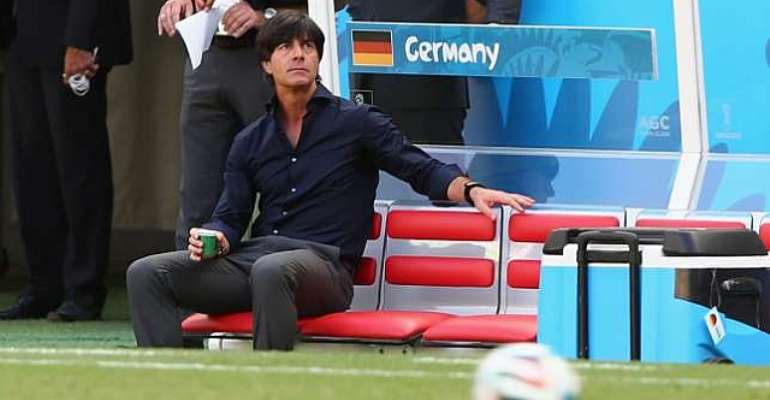 Germany's coach picked the same starting XI against Ghana that started the Europeans' 4-0 demolition of Portugal in Group G but Low's men had to come from behind to secure a point in the heat of Fortaleza.

In the first half, Germany struggled to properly test Ghana goalkeeper Fatawu Dauda but took the lead fortuitously after the break when Mario Gotze mistimed a header but still knocked Thomas Muller's cross into the net via his knee.

Low again picked a quartet of central defenders for his back four and their lack of mobility was exploited as Ghana responded with two quick goals.

Andre Ayew headed Harrison Afful's cross home in the 54th minute after Benedikt Howedes failed to get out to his opposing full-back, while Asamoah Gyan put Ghana ahead nine minutes later after finding space between Mats Hummels and Per Mertesacker.

The introduction of Miroslav Klose and Bastian Schweinsteiger seemed to lift Germany, however, and the former scored the equaliser in the 71st minute.

But Low conceded after the match that his team had struggled with the conditions and Ghana's high-intensity second-half showing.

"Ghana did a good job. They succeeded in closing down space, we weren't able to get the open spaces," he said.

"It was an incredible high pace and the players gave everything.

"We wanted to avoid a hard fight with these temperatures. The team showed a strong morale to come back after we were down."

Klose became the joint leading goalscorer in World Cup history, drawing level with former Brazil striker Ronaldo on 15, and the veteran forward could be an option for Low in their third group match against the United States on Saturday.

Schweinsteiger, who replaced the ineffective Sami Khedira in midfield, could also be in line for a recall, having missed the win over Portugal with a knee injury he suffered in training a week ago.

"I think Schweinsteiger and Klose breathed new life into the game; Khedira and Gotze were on their last legs," Low said.

"It was great that Miro got the goal."