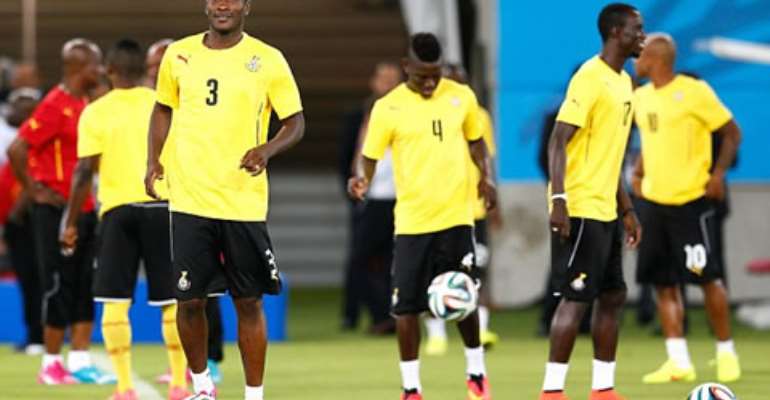 Black Stars skipper, Asamoah Gyan, has appealed to Ghanaians to forgive young Jordan Ayew for blowing away what could have been the match winner against Germany in their crucial Group G game in Fortaleza last Saturday.

According to Gyan Jordan admitted his fault and apologised to his teammates in the dressing room immediately after the match and they all accepted his apology and excised to focus on the next game against Portugal which was the most important.

'We spoke to him about that chance he missed and he admitted his mistake which was the most important thing,' Gyan revealed in a post-match interview.

The Stars skipper was in a very good position to score after the Sochaux striker has made a brilliant solo run on the left in the second half, but he instead decided to go for glory and ended up shooting feebly into the hand of goalkeeper Manuel Neuer.

In spite of that blunder, Gyan described Jordan as a promising striker with prospect for the nation in the future.

'Once he has admitted his mistake I want Ghanaians to forgive him because he is the future hope of Ghana football,' he stressed.

He said having picked a point against Germany, there were now focused on beating Portugal to enhance their chances of advancing in the competition.

In a separate interview, Jordan confirmed what transpired in the dressing room after the match and also confessed admitting his mistake to his colleagues.

In his defence the youngest son of Maestro Abedi Ayew Pele said after making that long solo run for the centre line he was so tired and that was what resulted in the mess.

'After making that long solo run I was so tired when I got to the goal area. I didn't make any mistake but when they told me I made a mistake I accepted it and apologized to the team in the dressing room,' he said in the mixed zone.