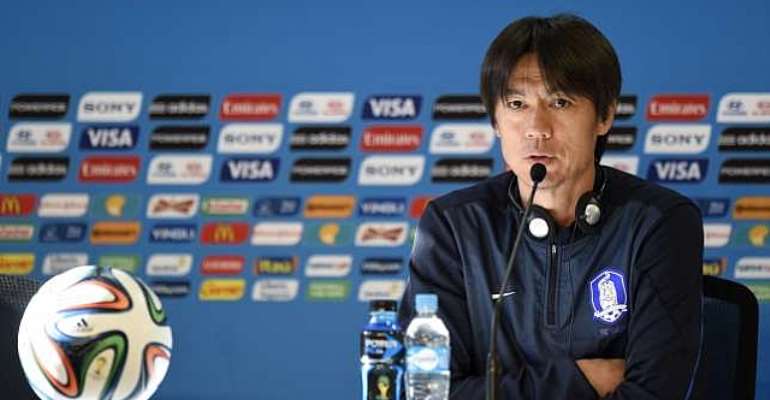 Algeria scored 16 goals in eight games to qualify for Brazil 2014, while they hit the back of the net seven times in their three friendlies this year before arriving at the World Cup.

But in their opening match of the World Cup against Belgium, Algeria attempted just three shots, taking the lead thanks to Sofiane Feghouli's penalty before eventually losing 2-1.

Algeria had just 32.9 per cent possession against Belgium but Hong warned his team on Saturday to expect a much more proactive performance from Vahid Halilhodzic's men in Porto Alegre.

"The Belgian team was very defensive as was the Algerian team, and I don't think that's how (the Algerians) will play with us," the 45-year-old coach said.

"They have a lot of good attackers and they are very speedy players overall."

Hong added: "The Algerian midfielders are very quick and they put on a lot of pressure. How we're able to overcome that pressure and how we play the spaces will be very important."

South Korea winger Son Heung-min was particularly impressed by Feghouli against Belgium and said he and his team-mates would have to watch the Valencia midfielder closely.

"Feghouli showed great form with Valencia this season and proved to be a threat on the field," the Bayer Leverkusen forward said.

"Knowing that, we have to make sure he doesn't become a threat."

South Korea managed 10 shots in their opening match against Russia, which ended 1-1, and put five on target but needed a huge error from goalkeeper Igor Akinfeev to take the lead through Lee Keun-ho.

Akinfeev let Lee's shot slip through his hands and into the net in Cuiaba, as South Korea scored just their fourth goal in seven matches this year.

Hong's side were held scoreless in their two pre-tournament friendlies against Tunisia and Ghana and their troubles in the final third were clear to see at the Arena Pantanal as the likes of Son and Koo Ja-cheol wasted promising opportunities.

"We have to score a goal. Of course that's the most important thing," South Korea's coach said.

"I'm sure there will be opportunities for us to score and so whether we take advantage of those opportunities I think will be the key to winning the match."