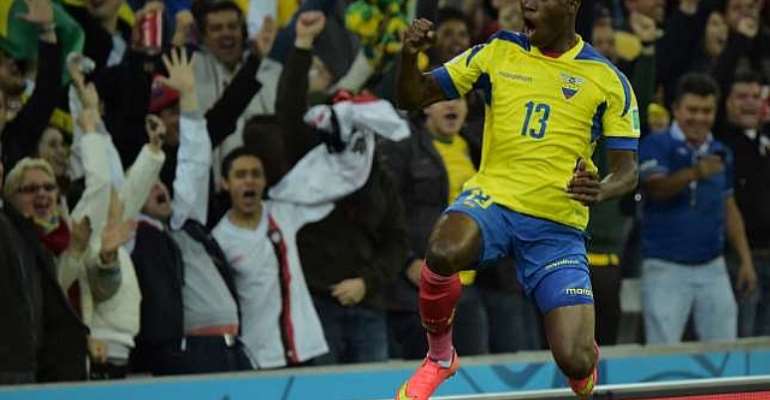 Valencia struck twice as Ecuador came from behind to defeat Honduras 2-1 in Curitiba, heading in the winner in the 65th minute to notch his third goal of the FIFA World Cup.

The victory ensured Ecuador's hopes of reaching the last 16 remain alive, with the South American nation joining Switzerland on three points in Group E, three behind leaders France, who Valencia and co. face next.

But Valencia was keen to lap up the atmosphere on Friday, before looking ahead to the vital clash with France, set for Wednesday in Rio de Janeiro.

"They are goals that one dreams about as a child and then those dreams come true thanks to the coach and this wonderful team," the 24-year-old said about his brace against Honduras.

"I would like to be here forever but the most important thing is the team qualify for the next stage.

"That is very important to us, we are concentrated and working on doing that."

After Carlo Costly opened the scoring for Honduras with a powerful drive just after the half-hour mark, Ecuador equalised three minutes later when Valencia tapped the ball in at the back post from Juan Carlos Paredes' deflected shot.

Walter Ayovi set up Valencia's winner, curling his free-kick onto the forward's head and the Pachuca man expertly directed the ball downwards, out of the reach of Honduras goalkeeper Noel Valladares.

Valencia made his debut for his country in February 2012 - also against Honduras - and Ecuador coach Reinaldo Rueda hailed the impact the former winger had made since the sudden death of former international Christian Benitez in July 2013.

"Enner's arrival in the national team has been very important," Rueda said.

"He has been here for 10 months, has grown up and improved a lot."

Media reports have claimed Valencia, who completed his first campaign in Liga MX last season, has attracted the attention of Newcastle, Everton and Tottenham in the Premier League.

Valencia scored 18 goals for Pachuca, with his 12 strikes in the Clausura championship seeing him claim the golden boot.