2014 World Cup: What Germany have to do different to beat Ghana 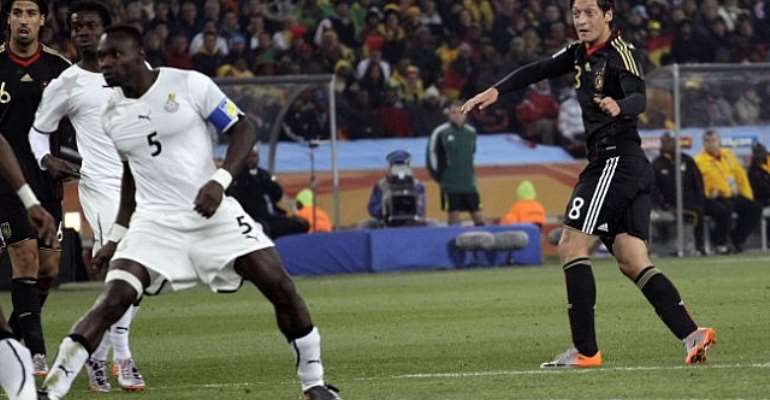 Germany's 4-0 win against Portugal in their World Cup opener was perhaps the best team performance of the tournament so far in Brazil.

Joachim Low won the tactical battle against Paulo Bento, the defense completely marked Cristiano Ronaldo out of the game, and the team got their biggest-ever win against Portugal.

From start to finish, it was as good of a performance as Germany have had since 2010. Their previously criticized back line looked stable, their injury-scarred midfield in total control and their experimental attack clinical.

So why change? More importantly, what is to change?

Well, for starters, Ghana are a completely different opponent than Portugal. According to  Metro , prior to the Portugal game,  Low called Bento's side the “world champions of the counterattack.”

Indeed, Portugal's bread and butter is their counter-attacking game. Quick passes out of the back to the quick Ronaldo and Nani proved effective in qualifying and got them to the World Cup in the playoff against Sweden.

On Monday, Low brilliantly neutralized Portugal's counter-attacks. He set up the team defensively more than usual, utilizing two center-backs in the full-back positions, and instructed them to sit deep rather than bomb forward.

Low  praised  (in German) Jerome Boateng for the job he did on Ronaldo, and the back line that leaked so many goals over the years suddenly looked impenetrable against Portugal. The team kept its shape and barely allowed Portugal any shots on goal.

Where Low adjusted, Bento did not. Portugal were set up as expected, and when Germany either absorbed or broke up their attempted counter-attacks, they had no alternative plan.

Where Germany have looked vulnerable over the years is when teams aggressively pressed them in midfield. Portugal failed to exert much pressure from the start, and Pepe's red card made things even more difficult in that regard.

Ghana, on the other hand, pose a different proposition altogether.

As defender Per Mertesacker  pointed out  (in German) in Thursday's press conference, they are physically stronger than the Portuguese and are more used to the hot climate. After having lost their opener against the United States, this will also be a make-or-break for the African side.

Ghana are known for their intense athleticism and pressing. Despite losing to the United States in their opening game, they were the dominant side and exerted an enormous amount of pressure on their opponents. They attacked vehemently for 90 minutes and imposed themselves physically.

For Germany, this will be a completely different ballgame. The players will have less time on the ball, so they will be forced to play at a much higher tempo than in their first game. And with speed comes the possibility of error.

That coupled with the physical element of the game will really test Germany in the Brazil heat for the first time. In 2010, aside from Spain, Ghana was also the team that most effectively interrupted Germany's free-flowing game. This year should be no different.

Low will most likely keep the lineup the same, but he may want to consider utilizing at least one natural full-back in this game, not only to increase the pace of the speed, but to also exploit the space on the flanks.

Against the United States, Ghana left a lot of room behind their full-backs. Kwadwo Asamoah in particular spent more time in the opposition half than in his own, an opportunity more readily exploitable by someone like Erik Durm or Kevin Grosskreutz rather than a center-back filling in out wide.

Low may also want to consider utilizing a more physical player up front. Mario Gotze and Mesut Ozil both performed very well against Portugal but do have the tendency to be knocked off the ball easily at times.

A heavier body like Miroslav Klose or Lukas Podolski could be a good antidote to Ghana's physical play if necessary.

And if not for that reason, then definitely for their finishing ability, because unless Ghana also have a player sent off early, don't expect Germany to create as many chances against them as they did against Portugal.

Germany will also have another challenge on Saturday, namely their own complacency. Although Germany have lost only one of their 18 World Cup opening games, they have struggled in their second match in recent times.

Four years ago in South Africa, Germany lost their second game against Serbia. Four years before that, they barely scraped out a win against Poland. In 2002, they were lucky to draw with Ireland after a dominant 8-0 win in the first game, and in 1998, they were held 2-2 by Yugoslavia.

Whether it is complacency setting in following a big first win or not, a loss against Ghana could undo all of the good work from the Portugal game.

Germany could secure qualification from the knockout rounds with a win against Ghana, so the players have to be completely focused and put the Portugal win completely behind them.

If Germany wants to finally end their 18-year trophy drought, Low and his team have to prove this year is different. And that starts with a win in their second match.