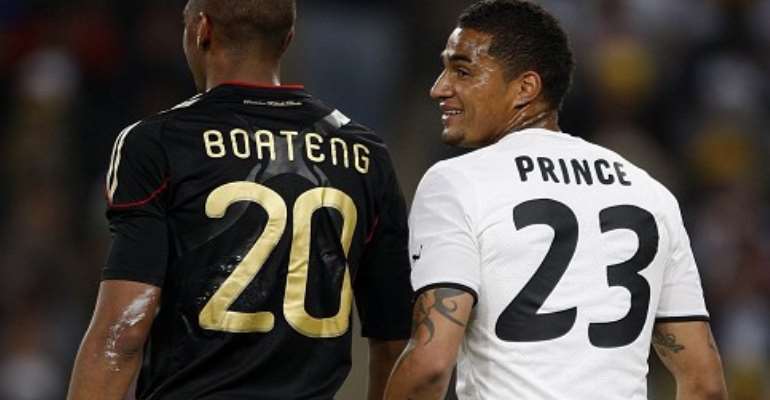 The Boateng boys have come a long way from that under-privileged, run-down high-rise section of  Berlin  and will once again be applying those life lessons learned on the biggest stage at the World Cup on Saturday.

Kevin-Prince and his  Ghana  team square off against Jerome and  Germany  in the Group G showdown, a rematch for the brothers of their 2010 battle in South Africa which Germany won 1-0. The Boatengs made World Cup history – the first time two brothers had played against each other in the tournament.

Although the Boatengs both live in Germany and regularly play against each other in the Bundesliga, Kevin-Prince switched allegiance to his father's homeland of Ghana in 2009 because he felt he was not getting the chance he deserved with Germany.

A charismatic and natural leader on and off the pitch, Kevin-Prince has rarely shied away from expressing his opinion.

The muscular midfielder recently made headlines for saying Germany does not have any “Typen” (“tough-guy”) leaders who step up and take charge when the chips are down – criticism that made waves.

“In really tight matches for Germany there was never anyone who stepped up to take charge,” said Kevin-Prince, 27, ahead of the Germany match. “It's a fundamental truth.”

The unspoken subtext of his comment is that he is exactly that kind of “Typ” that Germany sorely needs: a confident, courageous, bold, loud, and opinionated leader that Germany has not had since Michael Ballack retired – or especially since Stefan Effenberg's era ended over a decade ago.

By contrast, Jerome is a natural born follower and admits he has always looked up to his older brother, who once led his AC Milan team off the field after being racially abused by fans.

Jerome, 25, followed Kevin-Prince into the Hertha Berlin youth programme at a young age after his older brother was discovered by a Hertha scout.

He later followed Kevin-Prince to  England  - Kevin-Prince played for  Tottenham Hotspur  and Jerome played for  Manchester City . Jerome later moved to  Bayern Munich  and has been a stalwart defender for the team that won the 2013 Champions League and back-to-back domestic doubles in 2013 and 2014.

“I'm proud of him,” Jerome said in a Berlin newspaper interview last year of his brother who now plays for  Schalke 04 .

NO CONTACT
The two communicate regularly but tend to avoid contact during the World Cup. Jerome ardently defends his older brother against the lingering criticism in Germany for Kevin-Prince's foul against Ballack in the Premier League shortly before the 2010 World Cup that knocked the captain out of the tournament.

“The public's image of him isn't the best in Germany,” said Jerome. “That wasn't his intention but it happened and it seemed to confirm a lot of people's stereotype: 'the ghetto kicker' from the troubled district, the gangster footballer from Wedding. He was made a villain in Germany over that foul.”

In Wedding, where many immigrants live, their youth trainer Gora Sen told Reuters that Kevin-Prince was already an outspoken leader as a younger player.

“Kevin exhibited the characteristics of a leader – not all of them good,” said Sen, 43.

“I think if you would ask him today he would acknowledge that. He would go too far and sometimes spoil his own chances. But when he was on the soccer pitch even back then he was something special. He always played to win, fighting and giving it all. He was always a top athlete. I always liked him.”

Sen said Jerome was different. “He was a tall, sensitive boy who needed a lot of attention, especially when his older brother was playing,” said Sen. “Jerome always looked up to his brother and it didn't come as easily to him.”

Galamsey fight: Four Chinese nationals to be deported
41 minutes ago

Gov't must opt out of Sputnik-V vaccine procurement contract...
41 minutes ago