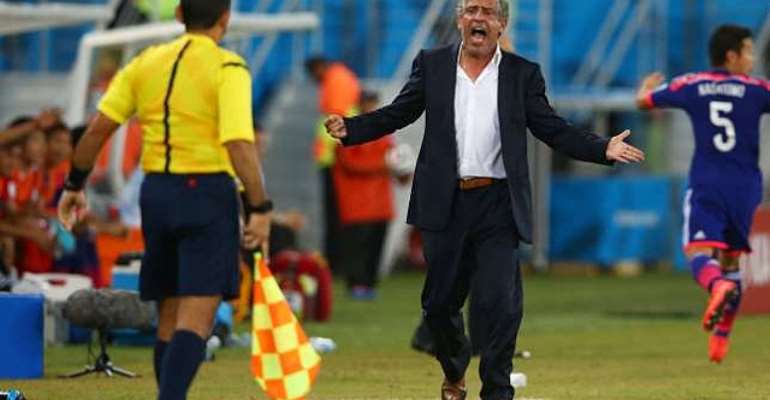 Greece lost captain Kostas Katsouranis seven minutes before half-time in their Group C clash with Japan on Thursday but held out for a 0-0 draw at the FIFA World Cup.

Japan dominated possession throughout the match, attempting 553 passes to Greece's 177, but Santos was happy with how his team denied Alberto Zaccheroni's men and held on for a point at the Arena das Dunas to keep their hopes of a round of 16 berth alive.

"I told my players at half-time that we should be compact at the back," the 59-year-old Portuguese coach said at his post-match press conference.

"We tried to eliminate the midfield for them and we were able to do that even though Japan were dominating."

But Santos was unhappy with Greece's inability to threaten Japan with the Europeans finishing the game with just nine shots and four on target.

"I told my players at half-time the way to fight back is to work well defensively and try to counter-attack but you need to have the ball in the right moment to use the spaces and the wings," he said.

"I believe we did part of that well but had difficulties in other parts."

The draw leaves Greece and Japan on one point each in Group C, five adrift of leaders Colombia - who have secured a spot in the knockout stages - but only two behind second-placed Ivory Coast.

Greece will reach the round of 16 if they defeat Ivory Coast and Japan fail to beat Colombia on Tuesday but Santos claimed his side could have been even closer to advancing if referee Joel Aguilar of El Salvador had kept his cards in his pocket in the first half.

Aguilar yellow carded Katsouranis for an ugly lunge into Yuya Osako in the 27th minute and for tripping a surging Makoto Hasebe 11 minutes later, which saw the PAOK defensive midfielder sent off.

"When Katsouranis was sent off, it changed the game fundamentally," Santos said.

"Without the red card we probably could have won the game."

Santos was surprised Japan did not change their tactics in the second half when they had the advantage of an extra man.

"We thought Japan might change their style and play more long balls, rather than always playing short passes," he said.