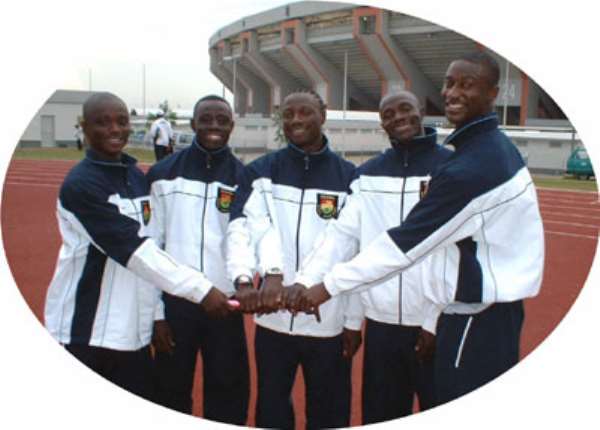 Fellow citizens of Ghana, as we all know one of the proudest moments for all Ghanaians is seeing our sports men and women do well in international sports competition. For many years Ghana track and field has been deteriorating in terms of individual performances and also as a team. Many reasons have been given as causes for this trend. One of the most cited reason by all stake holders is the lack of organized preparations for the nations elite athletes.

Most readers I am sure will remember the good performances put up by the Ghanaian athletics team at the All African Games held in Abuja last year, it will interest readers to know that the athletes through their own resources came together and trained as a team and they produced good performances and the sad part of that story is that despite the Presidents of our country's call for all the expenses borne by the athletes in preparation for the games to be reimbursed nothing has been done about that.

It is an Olympic year and once again Ghana's elite athletes including Myles Mills, Aziz Zakari, Eric Nkansah, Vida Anim, Magaret Simpson and Golden boy Gaisah, will be called upon to represent Ghana during the games. The bad part about the whole situation is that most of these athletes up till today have not received any help from Ghana in their preparations towards the games. In order to be able to finance their preparation some of the athletes have taken up jobs, which take away from their rest and training. The Olympic games is not the same playing field as the All African Games and as such the good performances might not be repeated, however helping to prepare the athletes well increases the chance for them to achieve good performances and as such bring glory to our motherland.

The organizers of the games have changed the qualifying procedure for relay events for this years Olympics. For the first time only the top 16 teams in the world will be allowed to compete in the Olympics. Since Ghana as a team run together only twice last year we were ranked number 12 in the world by the end of the year. At the moment we have been passed by Japan so we are number 13 in the world. In an attempt to increase our chances to qualify for the games, Eric Nkansah relocated to US to join the rest of the relay squad so that with the help of Ghana they could travel through the states and participate in some meets. However no financial help came through and as such his trip so far has been useless. At the moment, most of the athletes are very frustrated about the situation and guess what, this is the same situation that has made so many prospects quit the sport or changed nationalities.

Through this letter, I am appealing to all citizens of Ghana and all other well wishers to come to the aid of the Ghanaian Olympic Athletics team because at the moment, our preparations for the Olympic Games is in total shambles.