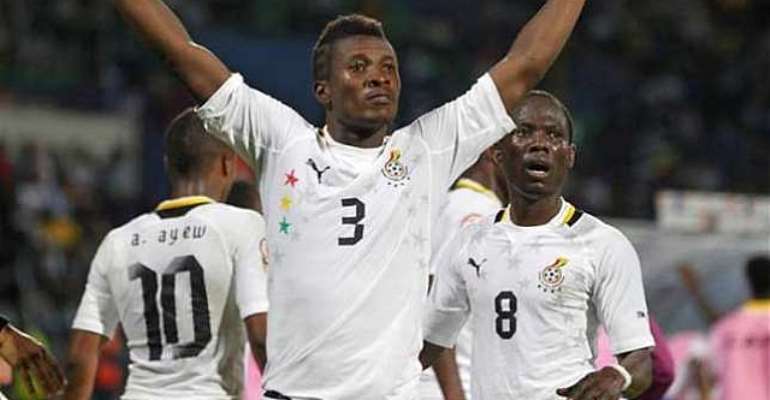 Asamoah Gyan says Ghana's self-belief is at very high for the opening world cup game against the USA in Natal.

Gyan will lead out the side on Monday knowing the rest of the world considers the Black Stars as underdogs for a game against a side they have beaten twice already but says amongst Ghanaian players there is genuine admiration for the USA but also immense belief in their own ability.

'We believe in ourselves', Gyan said. 'We know a lot of people consider us as underdogs but we were considered underdogs too in the last two world cups too.'

Gyan scored a stunning winner in Rustenburg for Ghana four years ago in South Africa and while he is looking forward to a similar Ghana performance, he is keen to point out Monday will be a different game. Gyan feels rather than hand Ghana an advantage the two previous wins over the USA makes for a more difficult game on Monday.

'It will make the game very, very difficult because this is a different team, different coach and different tactics. They will come for revenge too. Mentally they don't want us to beat them a third time which will make it difficult for us but we are ready to give it our all too.'

Gyan also acknowledges that the expectation on Ghana to do well is immense after the performance over the last two world cups but is not complaining.

'The expectation is high back home. Now because of what we did in the last two world cups people believe we can do more which is a normal thing. Honestly there is pressure but sometimes pressure is good. We believe in ourselves. We cannot wait for tomorrow. As first game players get nervous but we want to go out there, play and win.'