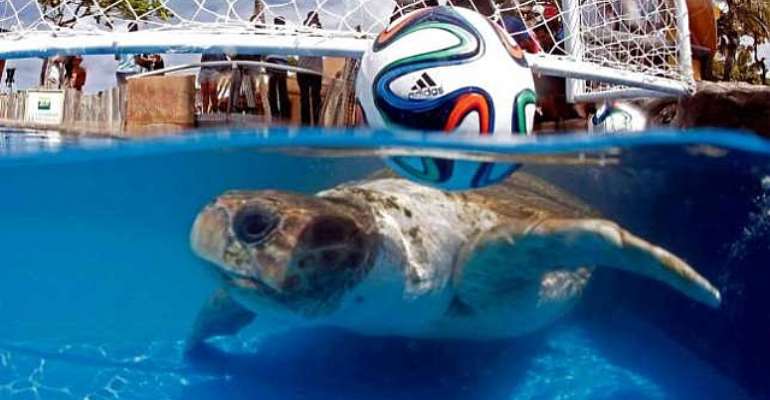 The animal oracle predictions for the World Cup have begun, with host nation Brazil getting a vote of confidence from its chosen turtle tipster.

By making a patriotic choice of food, loggerhead turtle Big Head predicted Tuesday that the host nation will beat Croatia in the opening game of the World Cup on Thursday. Big Head is Brazil's answer to  Germany's  Paul the Octopus, who started the psychic animal craze during the 2010 World Cup and spawned a slew of imitations around the world.

At the Praia do Forte turtle sanctuary north of Salvador, the 25-year-old male sea turtle was given the choice between eating a fish hung from a Brazilian flag or a Croatian flag. After attempting to eat the fish hung from a football indicating a draw, Big Head chose the one representing Brazil.

The small crowd of onlookers cheered in appreciation of Big Head's choice.

This is the second time Brazil will host soccer's biggest event, though memories of the 1950 edition are still tinged with bitterness over the "Maracanazo." The Selecao - needing only a draw to win the title - lost to continental rival  Uruguay  2-1 in the final in front of nearly 200,000 people at the famed Maracana in Rio de Janeiro, the site of next month's final.

The build-up of both Brazil since being awarded this World Cup in 2007 and Luiz Felipe Scolari's team have sometimes traversed parallel tracks - there have been missteps and setbacks building stadiums and infrastructure amid a skeptical public, while some players were on the 2012 Olympic team that lost to  Mexico  in the gold medal game. But Scolari's squad recovered nicely while hosting last summer's Confederations Cup, thrashing reigning World Cup champion  Spain  3-0 in the final to establish the Selecao on the short list of contenders as they seek a record sixth championship.

Much of the burden of meeting the host nation's sky-high expectations will fall upon Neymar, who at 22 has already drawn comparisons to Brazil's legendary No. 10 Pele for his attacking prowess while scoring 31 goals in 49 international appearances. Wearing the No. 10 last summer, Neymar won the Golden Boot as the best player in the Confederations Cup and then had nine goals in 26 matches during his first season with  Barcelona .

Brazil specifically prepped for Croatia in its final friendly, a 1-0 victory over  Serbia  on Friday as striker Fred - the Silver Shoe winner in the Confederations Cup with five goals - scored in the second half. The Selecao had trouble dealing with Serbia's physical play and professional fouling, something Croatia will likely duplicate to slow Brazil's up-tempo pace.

''It was tough to create play, there wasn't a lot of space,'' Neymar said. ''But we have to get used to that, we have to find ways to deal with that. I think for the opener we will be OK.''