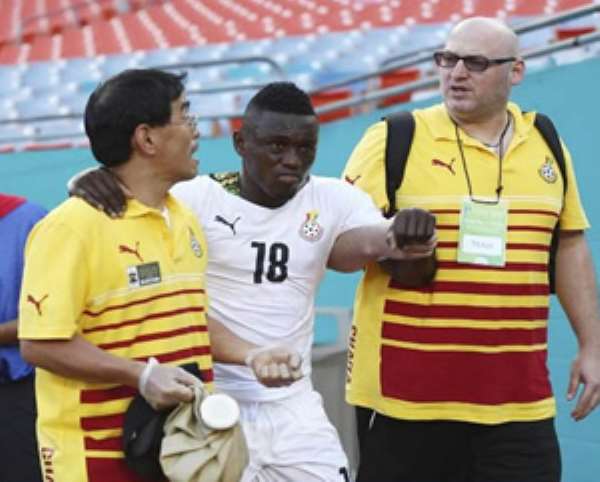 The Ghana medical team are continuing to monitor Majeed Waris' recovery after the striker sustained a thigh injury.

Waris suffered the injury to his quadriceps during the World Cup warm-up game against South Korea in Miami on Monday which finished 4-0 in Ghana's favour.

Black Stars' team doctor Baba Adam told www.ghanafa.org, “He had a knock on his left thigh. We initially tried to see if he could go back to play but we realised it was an injury that needed to be taken care of or managed well.

“We did an MRI on the quadriceps and what we realised is that, there was a tear.

“We hope to get him on to the field again pretty soon. However, we are still monitoring him to the deadline when we will give our final statement on his state of affairs.”

He reckons Waris' recovery from now until the deadline for any squad change, a day before the opening game would determine if he could be a part of the World Cup.

“The FIFA deadline is 15 June, so we will monitor till that day and see how things turn up,” Baba Adam said.

Kwesi Appiah's squad arrives at their Maceio base today to begin their preparations for the showpiece.

Their campaign starts on Monday 16 June against United States in Natal.