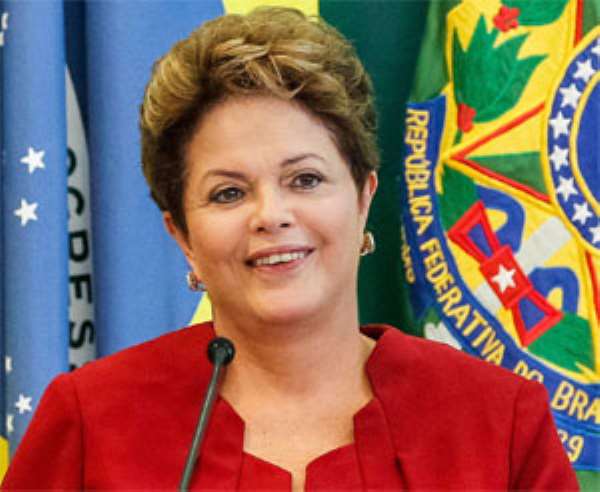 In a TV address, she said “the pessimists” had been defeated by the determination of the Brazilian people.

She rejected criticism of overspending, saying that the tournament would leave a lasting legacy of infrastructure.

Brazil has seen a year of protests against bad governance and perceived excessive spending on the World Cup.

Metro strikes are also threatening to disrupt the opening game in Sao Paulo and the final in Rio de Janeiro.

The head of the World Cup local organising committee, Ricardo Trade, told the BBC that while a strike would be “a nightmare”, the authorities were prepared and “inside the stadium, it will be a show”.

He insisted that Brazil would deliver.
'False dilemma'
President Rousseff: “Below that green and yellow jersey you represent a powerful legacy of the Brazilian people”

Speaking less than 48 hours before the start of the tournament, President Rousseff said that visitors would not be taking away infrastructure projects “in their suitcases”, which would instead remain in the country as a benefit for everyone.

She defended the $11bn expenditure on the tournament, calling it a “false dilemma” that World Cup spending somehow diminished investments in health and education.

The budget for these areas between 2010 and 2013 was many times greater than the investment in stadiums, she added.

“Rest assured of this, the World Cup accounts are being meticulously scrutinised by the country's auditing institutions,” she said.

It follows criticism by local residents who say that many promised development projects have been delayed or never materialised.

The World Cup will kick off on Thursday with a match between the hosts Brazil and Croatia at the Itaquerao stadium, or Arena Corinthians, in the outskirts of Sao Paulo.

However, work is still continuing to prepare the stadium ahead of the opening match.

Meanwhile. union leaders are threatening to resume a metro strike in Sao Paulo during the tournament if their demands are not met.

They are calling for staff threatened with dismissal for their involvement in strike-related disturbances to be reinstated,

A five-day stoppage that began last week caused widescale traffic chaos, with fears that a repeat of the disruption could prevent fans and employees from attending group stage matches. The strike was suspended on Monday.

President Rousseff has said she would not allow demonstrations to disrupt the tournament.

Thousands of extra police and soldiers will be deployed to ensure the matches get under way smoothly.