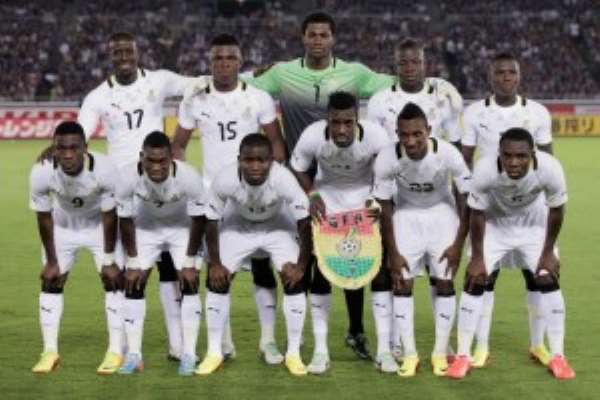 Ghana coach Kwesi Appiah a named very strong attacking force in his starting line-up to face South Korea in tonight's pre-World Cup friendly in Miami this evening with Asamoah Gyan and Majeed Waris leading the attack to be supported by Andre Ayew and Kevin-Prince Boateng.

In a massive show of force and intention to crash the Asian opponent, coach Appiah made as many as ten changes from the previous team that started against the Netherlands in Rotterdam last month.

Juventus utility player Kwadwo Asamoah will be deployed at left-back to play in the position he plays in the Italian Serie A while superstar Michael Essien has been dropped to the bench.

Goalkeeper Fatau Dauda was named to the start the match ahead of Adam Kwarasey who excelled in the previous friendly against Holland while hard-working Harrison Afful will play at the right-back.

The central defensive pair of Jonathan Mensah and John Boye while Mohammed Rabiu will partner Sulley Muntari at the heart of the midfield in an apparent attempt to give a good showing in the match.

Ayew and Boateng will play at the right and left wings respectively as they are expected to provide services to the Black Stars sharp shooters Gyan and Waris.

The starting line-up against South Korea at the Miami Sun Life Stadium looks to be the strongest Appiah has deployed in a match since he started preparing for the World Cup.

Yet there may still be plenty the Black Stars coach can hide from spies group opponents America, Germany and Portugal have sent to Miami tonight to watch the Ghanaians play with the World Cup starting this week.

But the absence of Essien, Opare, Afriyie Acquah and Kwarasey still suggest that there is plenty coach Appiah can hide while he could readjust the positioning of some players in the match.

The starting line-up gives fans the faint idea of the sort of players Appiah will play in their opening Group G match against the United States at the World Cup.

Black Stars fans will be hoping for the result that would boost their confidence going into the World Cup as they are expected to arrive in Brazil by Wednesday.

What do you think of the Black Stars starting line? Are you satisfied with it? Do you think the coach should have hidden more from the opponent? Make your views known in the box below: