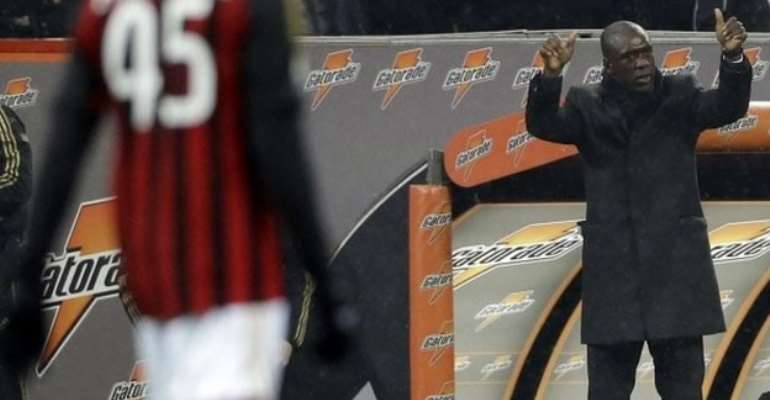 Dutchman Seedorf only arrived at the San Siro in January - succeeding Massimiliano Allegri after the club's disappointing start to the season - but has been relieved of his duties after Milan finished eighth in Serie A.

Inzaghi, a San Siro legend like Seedorf, has never coached at a senior level but has been promoted from Milan's Under 19 team.

Pointing the way: AC Milan legend Filippo Inzaghi has been appointed as the new manager at the San Siro

A statement released by the club read: 'AC Milan wishes to communicate that Coach Clarence Seedorf has been sacked, and the first team has been entrusted to Pippo Inzaghi until June 30, 2016.'

According to Gazzetta dello Sport the Milan board were initially unwilling to pay the remainder of Seedorf's wages he was owed after signing a two-and-a-half-year deal.

However, the club will now put the former Holland midfielder on gardening leave and continue to pay him until the end of his contract.

The sacking comes after Milan president Silvio Berlusconi said that the former Rossoneri star was part of the club's 'past' on Friday, though he did stop short of confirming that the Dutchman had been sacked.

Claude Makelele, recently appointed the new boss of Bastia in France, is now the only black manager working in Europe's top leagues now Seedorf has departed from the Milan hotseat.

Bishop Dag apologises to Otumfuo over 'offensive' sermon
36 minutes ago

There's power in a father's encouragement – Pastor Otabil
36 minutes ago