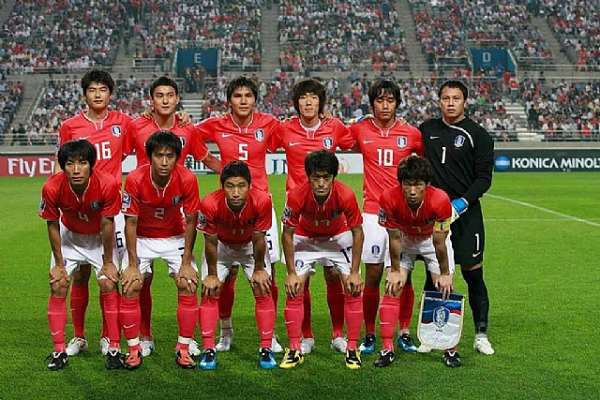 South Korea will field a strong squad against Ghana on Monday in their final tune up match ahead of the 2014 World Cup finals.

Head coach Hong Myung-bo won't depart too much from his starting lineup deployed against Tunisia in the 1-0 defeat at home last month.

But center-back Hong Jeong-ho, who bruised his foot in the second half of that match is a serious doubt.

He has since recovered and has taken part in full drills since Thursday, but the coach could keep the defender on the bench as a precaution.

Kwak Tae-hwi, the elder statesman of the squad at age 32, will likely take Hong Jeong-ho's spot in the starting XI, joined by Yun Suk-young, Kim Young-gwon and Lee Yong on the back line.

Jung Sung-ryong, who stopped a penalty against Ghana in a friendly three years ago, is expected to be back in net.

On offense, Park Chu-young should get another nod as the featured striker, with captain Koo Ja-cheol backing him up on the secondary line of attack.

Son Heung-min and Lee Chung-yong are expected to be back on the flanks. Ki Sung-yueng and Han Kook-young should be in to take care of midfield once again.

As he did against Tunisia, coach Hong will likely make the maximum six substitutions in the match.

Hong said he hasn't completely decided on his starting lineup.

“I will have to take into consideration players' chemistry and form,” he said. “If we can beat Ghana, our players will receive a huge confidence boost going into Brazil.”

South Korea and Ghana also faced each other in their final tune-ups before the 2006 World Cup in Germany.

The Black Stars recorded a 3-1 win with goals from Asamoah Gyan, Sulley Muntari and Michael Essien.