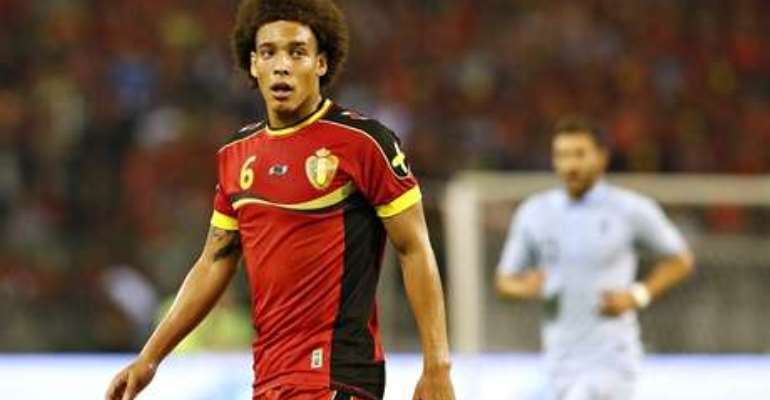 A villain. A brute. A criminal. Enemy of the state, or at least for those with a purple Anderlecht heart. The date 30 August 2009 would forever change Axel Witsel's life. It was the day that an elegant midfielder with the world at his feet and already crowned with a trophy for best player in the Belgian league became a beast.

That Sunday night, in a fiery game between title rivals Anderlecht and his Standard LiÃ¨ge side at the Constant Vanden Stock Stadium in Brussels, Witsel threw himself into a tackle with a sliding Marcin Wasilewski, a robust defender who doesn't mind an elbow or the occasional kick. His eyes are closed, his leg stretched. While the Anderlecht defender is first to the ball, Witsel comes too late and he plants his studs,  over the ball, at full speed on Wasilewski's leg . A horror tackle, horror scenes.

Wasilewski screams out his pain, his foot is dangling. Anderlecht players have tears in their eyes, while they see their team-mate suffering. The lamb has broken the leg of the butcher. Witsel gets a red card, but the worst has yet to come. Media and public pillory him. He's front page news for days. At Anderlecht they spit him out. He gets death threats and hate mail.

The FA suspends him for eight games, but the tackle will haunt his family and him for months. 'People insulted him, some even threw stones through our windows', remembered his dad in an interview. 'The incident has changed Axel. There is an Axel before the tackle, and an Axel after. His character became more closed. You could see in his face that he was touched by the storm around him. That lasted a few days and then he made the switch.

'We haven't pushed him into a transfer. We never advised him to leave Belgium at that time, to flee from the media attention. He has created a thick skin and became mentally strong and balanced. No one can drive him crazy anymore.' Like Diego Maradona will always be remembered for the hand of God, like ZinÃ©dine Zidane will always be reminded of his head-butt, Witsel will always carry this tackle with him. He has learned to let it go.

Time heals. Belgian fans have embraced him again, although some Anderlecht fans still can't stand him. The beast is a beauty again. A gracious midfielder with an excellent technique. The player he always has been, apart from on that one miserable da. Until 2009 the career of the son of a father with roots in Martinique and a Belgian mother had flourished. Growing up as a player alongside his best friend Nacer Chadli on a square in Vottem, a suburb of LiÃ¨ge, educated at VisÃ© and later, at the biggest club in town, Standard LiÃ¨ge.

In 2007 he made his way into the first team of the future Belgian champions, a few months after Marouane Fellaini, another symbol of the club. He's one of the key players in the championship-winning squad of 2008, the first title for Standard in 25 years. 'I've never felt such an explosion of emotions', said Witsel at that time.

It was a party that he would never forget. The title win accelerated his career. He was handed his first call-up for the national team at just 19. Big clubs come to the Stade de Sclessin to watch the talented teenager. There are rumours about Real Madrid, Arsenal, his dream team, but he resists. He wins another title at Standard, and after the Wasilewski incident, he waves goodbye with a cup and moves to Benfica, not the Premier League.

The Portuguese Liga Sagres turned out to be a good fit. Where he was a winger in Belgium at first, later an attacking midfielder, Benfica's manager, Jorge Jesus, decided to move him deeper, as a No6. A role made for him. He dictated the tempo and in a good Champions League campaign he proves he is ready for a step up.

Sir Alex Ferguson is following him, but to the surprise of everyone - also himself - he signs for Zenit St Petersburg in Russia, who paid £35m for him. The Russian players are not happy about the high wages the new foreigners - Zenit also bought Hulk (Porto) for a vast fee - are paid and start to revolt. Vladimir Putin, Russia's president, joins the debate and defends the transfer of Witsel and co. The critics are silenced by Witsel's performances as much as anything else, as the central midfielder becomes one of the engines of the team. Like in the Belgian squad.

At the age of 25, Witsel is now a respected leader in the national team. A silent, inspiring, disciplined and hard-working force. The lieutenant of the manager Marc Wilmots, he is one of the five untouchables in the starting XI. He has all the qualities a modern midfielder needs: charisma, power, technique, vision, an excellent pass and he barely loses a ball. Wilmots says: 'He's my boss on the pitch. We understand each other with just one look.' Witsel admires Maradona and Zidane, his big idols. Like them he would like to shine at a World Cup.

He knows he needs to. Zenit don't want to sell him as a bargain: they want at least their investment back. A fee only the big teams are willing to pay. Until a top club sets him free, Witsel stays like a bird in a gilded cage in Russia, dreaming of the Premier League.