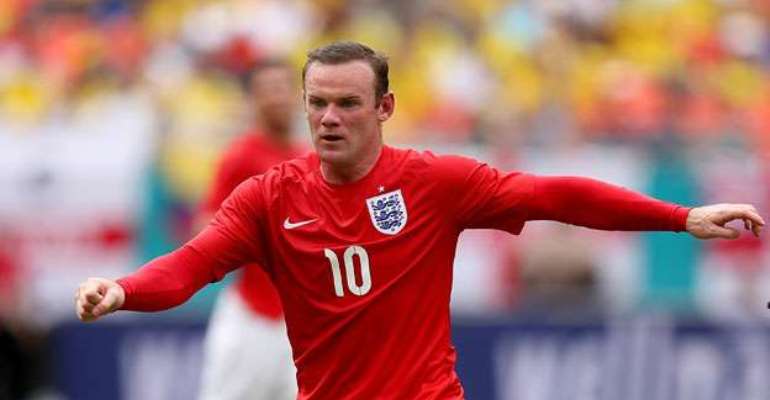 As has been the case in the lead-up to the past two FIFA World Cups, a large portion of the English media coverage ahead of Brazil 2014 has focused on Rooney and his importance to his national team.

England manager Roy Hodgson declared last week it is 'sad' how his country is 'Rooney-obsessed', while the Manchester United striker's performance was questioned in Wednesday's 2-2 draw with Ecuador, despite his goal in the 29th minute.

Hodgson used the 28-year-old on the left wing with new Liverpool striker Rickie Lambert leading the line ahead of Everton's Ross Barkley, which prompted questions about whether Rooney would be able to produce his best in Brazil in a wide role.

This came after Scholes questioned whether Rooney was past his peak and 'worn out', having started his senior career with Everton at the age of 16.

But Rooney has claimed he does not listen to comments from people outside the England camp and argued Scholes has very little to do with him nowadays.

"To be honest, I'm not really interested in what anyone else has got to say," Rooney said.

"I'm interested in what Roy Hodgson, the coaching staff and the people around me say. People have their opinions but I don't agree with them.

"He (Scholes) has been a team-mate of mine but he's also been away from the (United) first team for a long time. I've seen a lot of you (journalists) saying he's coached me and been around the team but he hasn't.

"I'm not really going to react. I'm not interested. He's got his opinions so let's leave it at that."

Rooney's goal against Ecuador was his 39th for England, although the United forward has never scored at a World Cup despite playing eight matches across two tournaments.

Generally, Rooney's lack of goals at World Cups have been blamed on injury problems he has carried into the tournaments but he declared that will not be a problem this year, despite missing several games in the final month of last season.

"I've trained hard, with no injuries and no recurrence of the groin strain I had at the end of the season," he said.

"I was always going to need game-time and I felt really good (against Ecuador), especially in the heat.

"I'm ready to play. I'm sure the manager will have a tough decision but I'm ready. I feel better."

Rooney added he does not care where Hodgson plays him on the pitch and promised he can have a significant influence as a winger, striker or attacking midfielder.

"I know how to play that role. I've played it many times and I have no problem doing that," the Croxteth-born attacker said.

"I've proved over the years I can play in different positions and now it's down to the manager.

"It's not about me, it's about the team, and if the manager wants to play me up top, in behind, left, right, I'm happy to do that."