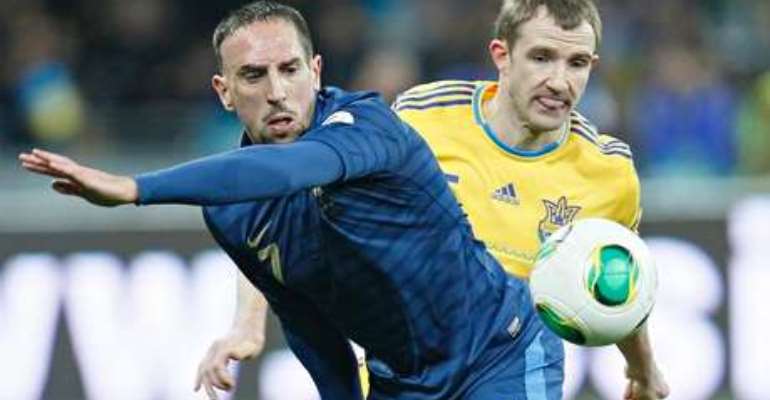 After a long period of probing and experimentation, in which he also toyed with 4-2-3-1, 4-1-4-1 and 4-4-2, Didier Deschamps has finally settled on a 4-3-3 system which, to his eyes, is the best suited to the characteristics of the men he's chosen for the World Cup.

The former Juventus midfielder and coach does not believe in the innate superiority of one system over the other. He is first and foremost a pragmatist whose tactical thinking has been shaped in Italy's Serie A, far more than the heir of the more romantic, more dashing style of the Ã©cole Nantaise where he first studied football under the aegis of 'Coco' Suaudeau. The 4-3-3 seems to maximise the potential of players he's selected because they were 'the best for the job', if not automatically 'the best' in their position, as Samir Nasri learnt to his cost.

This translates on the pitch as a flat back four, a three-man midfield characterised by its multi-functionality and its willingness to switch positions, and an attacking trident which is both incisive and technically far above average.

This formation, which France will use against Honduras in their opening game on 15 June is, as we've seen, one of several which were tested by the manager of  Les Bleus . Not always convincingly, it should be said. But the players whom Deschamps had at his disposal during this trial period were not necessarily the ones he needed to make 4-3-3 his default system. France struggled against Japan (0-1), sunk against Brazil (0-3) and, twice, struggled against Spain in their qualifying campaign - until the manager opted to revert to a 4-4-2 in the latter stages of  the game in Madrid.

Now nearly all the pieces fit the jigsaw, as was shown in the  3-0 win over Ukraine in the return leg of the World Cup qualifying play-offs , a game which is now a reference point for the manager. There is no reason for Deschamps to do away with what he's assembled, which has given France both menace up front and balance throughout what the French call  le bloc collectif .

In front of the goalkeeper and captain Hugo Lloris, the full-backs Mathieu Debuchy and Patrice Evra, perhaps not the most reliable of defenders, will be encouraged to show adventure on their respective wings, which will suit their natural inclinations. Overloading the opposing full-backs with the support of Franck RibÃ©ry and, probably, Mathieu Valbuena, should be one of France's most potent threats. In central defence, the elegant RaphaÃ«l Varane will be paired with either Arsenal's Laurent Koscielny or Liverpool's Mamadou Sakho - which one it will be will depend on form, rather than on purely tactical considerations.

There is no sensible argument against the three-man midfield of Yohan Cabaye (the 'sentinel'), Paul Pogba and Blaise Matuidi. The balance of this trio will be one of France's main assets. Technique, athleticism, ability to play through the lines - they possess them all. They also bring presence towards the opposition's goal, which should convince Karim Benzema he does not have to drop off (as he did, infuriatingly, throughout Euro 2012), and focus on what he has to do - and knows how to do: scoring.

RibÃ©ry, the most effective and prolific forward throughout the qualifying campaign, will be positioned on his favoured left flank, but there is still a question mark as to whom should be the right prong of that attacking trident, even if Valbuena, who always seems to keep his best performances for the national team, starts with a small advantage over LoÃ¯c RÃ©my and the versatile Antoine Griezmann.

Deschamps believes that, with these men and this system, his team can optimise its control of the game and that, when France have possession, triangles will appear almost naturally. This was the case against Ukraine, even if, on that occasion, the sheer aggression and intensity the French put into their game mattered more than their organisation on the field. This, as much as their tactical discipline, will have pleased the pragmatic fighter that Deschamps has been throughout his career.

Who is the player who is going to surprise everyone at the World Cup?

'Surprise' might not be the word, as he's now established as one of PSG's leaders in a position where Laurent Blanc is not exactly short on options, with Thiago Motta, Massimo Verratti and Yohan Cabaye vying for a place in the Parisian three-man midfield. But Blaise Matuidi should shake up a few in Brazil, literally and otherwise; the lack of exposure of Ligue 1 abroad and the see-sawing quality of France's performances since the catastrophe of South Africa 2010 mean that, outside of France, not many describe him as his former manager Carlo Ancelotti did: 'one of the finest midfielders in Europe'. This may well have changed in little over a month's time. True, despite being 27, he is still a relative newcomer at international level - Laurent Blanc gave him the first of his 20 caps in September 2010; true, his game has a certain rawness about it, and it's easy to understand why he's often singled out for the vigour of his tackling rather than for his all-round ability. His power and energy cannot fail to catch the eye, especially as, in terms of physique, he's much closer to a Claude MakÃ©lÃ©lÃ© than a Patrick Vieira, but he's far more than a destroyer. His assist for Karim Benzema and his wonder goal against Holland in a recent friendly at the Stade de France are examples of his wider abilities. If there is one sector in which  Les Bleus  have the means to compete with anyone, it is midfield, of which Matuidi is the undisputed patron. Deschamps must thank God that the young player chose to represent France rather than Angola, the country of birth of his father, Faria Rivelino.

Who is the player who is going to disappoint the most?

Franck RibÃ©ry, which would be very hard on a player who has genuinely tried to put the folly of South Africa behind him and was, unquestionably, Deschamps's most consistent, and most efficient player throughout the World Cup qualifying campaign. However, RibÃ©ry is feeling the effect of a season in which he's been repeatedly slowed down by injuries, the last of which, a haematoma in his right buttock which affected the sciatic nerve, necessitated an operation. When fit, he's been superb at times, though not of late. He looks exhausted, mentally as well as physically. Three weeks do not seem long enough for him to recapture his best form.

What is the realistic aim for your team at the World Cup and why?

Given the strength - on paper - of Group E, qualifying for the knock-out phase is a bare minimum, and not topping it would be a disappointment, even if Honduras and Ecuador represent terrae incognita for France, who have never faced the former, and only played once against the latter: a 2-0 win in 2008, in which none of Deschamps's 23 played any part. Then there's Switzerland, who have proved a very awkward opponent in the recent past. The last three games played between the two sides (two qualifiers for the 2006 World Cup, and a group game at the those finals) all ended in draws. What's more, the French have made a habit of struggling in the group stages of the last three tournaments. But let's say they clear that hurdle as expected. It is to be hoped it is not as runners-up. If that were the case, France would probably say goodbye to Brazil in SÃ£o Paulo on 1 July, Argentina being their likely opponent in the round of 16. Should the French win Group E, a run to the quarter-finals, with Germany looming at that stage, would be considered a fair reflection of their quality. In both scenarios, going further than that would be deemed a genuine exploit. But this World Cup will not be solely about results; more than anything, it'll be about recapturing the affection of the French public, which still hasn't digested or forgiven the sad pantomime of 2010.

I don’t know him – Afoko denies knowledge of prosecution wit...
50 minutes ago