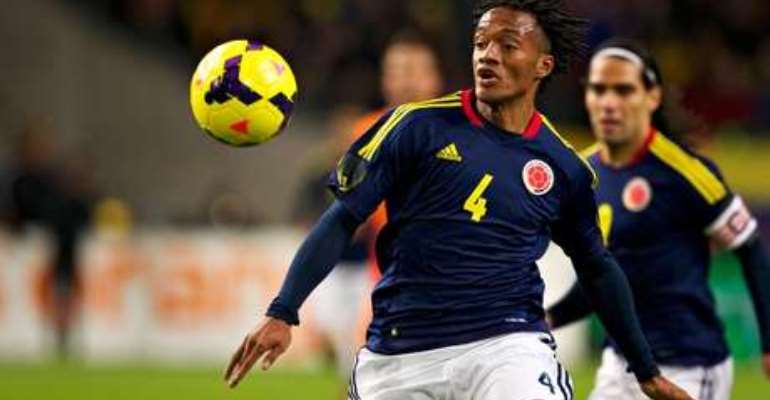 In Spain they say it will be Barcelona, in England the talk is of Arsenal, Liverpool or Manchester United, there are rumours of a move to Germany and the biggest clubs in Italy are also interested. Juan Guillermo Cuadrado is a wanted man, but what is it about the 25-year-old winger that has made him the Colombia national team's big revelation for this World Cup?

In 2008, having just qualified for his first  cedula , a national ID card given to all Colombians when they turn 18, the skinny teenager arrived at first division side Independiente MedellÃ­n during pre-season. Hailing from NecoclÃ­, a small town in northern Colombia famous for its bananas and beaches that stretch across to the Caribbean, Cuadrado was spotted playing for the local side AtlÃ©tico UrabÃ¡.

He had long dreamed of moving to Colombia's second city, MedellÃ­n, where his mother was living, but prior to joining her he had spent some time training at the second division club Rionegro before seeking his fortune in Argentina. However, that trip ended in disappointment and he had to return home having failed to find an agent who could fix up a move.

Today the Argentinian club representatives who missed the opportunity of snapping up this talented player for a big club while the youngster was in Buenos Aires must be ruing their misfortune. Cuadrado would return to MedellÃ­n before shortly leaving for Europe and becoming Colombian football's latest gold mine.

At Independiente MedellÃ­n Cuadrado was converted into a right-back where his speed in getting down the wing, impeccable crossing ability and way of battling into the area became a key factor in MedellÃ­n's 2008 title charge that ultimately saw the  Rojo de la Montana  finish the season as runners-up. His scrawny frame and long strides had made him a fans' favourite but he was recognised not just for his darting runs. Despite his baby face, his passing skills were at times like that of a veteran No10 and even in stadiums packed with 30,000 fans the youngster remained unfazed.

MedellÃ­n's supporters only had a short time to enjoy Cuadrado's performances before he was picked up by a scout who, in 2009, organised a move to Italy. Cuadrado signed for Udinese but having only made a handful of starts for the side he was soon sent out on loan to Lecce in order to acquire first-team experience. As always his speed and agility impressed and Cuadrado became one of the stars of the 2011-2012  Salentini  side, playing 33 games. Despite suffering relegation with his new club, the coveted forward took a step up when Fiorentina came in for him.

And it's here where it all began. His time spent at Lecce was vital for Cuadrado; not only did it give him valuable experience, but he was also handed the opportunity to tweak his position into a more attacking role. Cuadrado had arrived in Italy as a right-back but in Florence he was ratified as an out-and-out winger. What a huge waste having him bursting out from the back when he posed a much greater threat as a right midfielder or even further forward. In his new position Cuadrado blossomed and his attacking form was decisive in leading Fiorentina to successive fourth-place finishes in Serie A.

He has also become a key player for Colombia and the head coach, JosÃ© PÃ©kerman, has so far managed to get the best out of him. While all the cameras have been fixed on the striker Radamel Falcao, PÃ©kerman has used his two wingers, James RodrÃ­guez on the left and Cuadrado on the right, as explosive weapons in turning  Los Cafeteros  into an exciting attacking force. The results speak for themselves and PÃ©kerman's tactics helped Colombia achieve their first World Cup qualification since France '98.

At 25, Cuadrado still has room to improve and this World Cup could be his big moment. Using his speed to dazzle defenders, the winger is also an opportunist in the penalty area, scoring 15 times in 42 appearances at Fiorentina last season.

Many will hope he can reproduce the sublime tricks he showed for his country in the recent friendly against Brazil, where Cuadrado put in a man-of-the-match performance in scoring Colombia's goal in a 1-1 draw. Even Neymar was left seeking the NecoclÃ­-born winger to exchange shirts at the final whistle.

Not bad for a skinny young kid from Colombia's banana region who nobody had wanted to give a chance to in Argentina and who is now on the radar of Europe's leading clubs. Although whoever wins the race for his signature will have to pay around â‚¬30m (£24m) to Fiorentina after the Italian side made use of a right-to-buy clause with Udinese to acquire the player's full rights for â‚¬14m. This World Cup could be his stage to prove he is worth such an outlay.