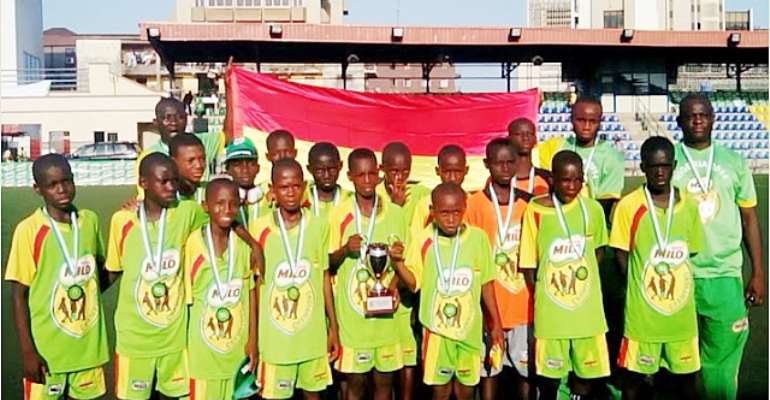 Ghana missed one kick as their Nigerian counterparts scored all five spot kicks to emerge Champions of the 2014 edition of the Milo African Championship.

The Zogbeli L/A Primary School boys put up a dramatic comeback after going down by 3 goals to 1 but it was still not enough to escape defeat at the Campos Stadium which was filled to its capacity.

The hosts went 2 nil up after 16 minutes through their captain Olushegun Olakule and added another just after the commencement of the second half through Mustapha Adamaba after Ghana's FatauIssahaku had pulled one back before recess.

Seconds after Nigeria's third goal, Fataucaught the Nigerian players and goalkeeper ball watching as he scored with a long volley from the center of the field to make it 3-2. With ten minutes left on the clock, the Ghanaians took advantage of a cross from the corner spot and got the much needed equalizer throughAbdulai Rashid who headed the ball straight to the top right corner of the Nigerian goalpost to push the game into penalty shootout.

The Ghanaians were left in sorrow after their fourth kick hit the goal post as Nigeria took advantage and scored their last kick to win the day. It took the Category Business manager of Nestle Gh. Ltd, Mr. OlufemiAkintola and his team not less than thirty minutes to console the kids as they wept bitterly after the final whistle.

Former African footballer of the year and former Supper Eagles captain NwankoKanu, who was a special guest at the games expressed his joy as the Nigerians won the trophy.

'You can see they really have the talent, I'm happy for the Nigerian kids but the Ghanaians also played very well. I'm proud of the boys' He said

Nigeria captain OlushegunOlakule was adjudged the most valuable player of the championship whiles his team mate Mustapha Adamaba picked the top scorer award after scoring four goals in two matches.

Earlier before the finals, South Africa defeated Kenya by 4-1 in the 3rd place match to pick the bronze medal.

Each player and the coaches were presented with branded footballs and medals as part of the other lucrative prizes for the Gold, Silver and Bronze winners.