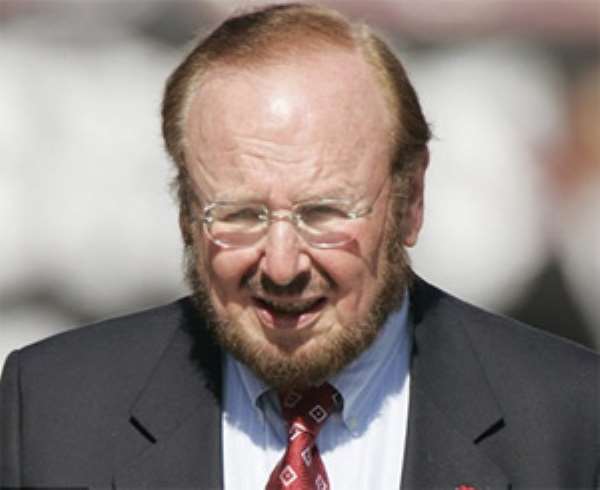 Malcolm Glazer
Malcolm Glazer, the man who led the controversial takeover of Manchester United in 2005, has died at the age of 85.

The American businessman will long be remembered as the Florida-based millionaire who took United in to private ownership nine years ago via a highly-leveraged buy-out, plunging the club more than £500million in debt.

Though Glazer Snr has been ill for some time and has left the running of United to sons Joel and Avram for the majority of the family's ownership period, he was the man who drove the purchase of the club against the wishes of United fans over a two-year period in the early part of the last decade.

A United spokesman said only: 'The thoughts of everyone at United are with the family tonight.'

The Glazer family remain owners of the Tampa Bay Buccaneers American football franchise that they bought in 1995. It was on the Bucs' website that news of Glazer senior's death was announced.

There will be respect but little sympathy from many United fans who will always blame Glazer for the money his family's company have drained from Old Trafford over the years to service their enormous debts.

Certainly Glazer's aggressive pursuit and purchase of United changed the club forever, leading , for example, one group of fans to breakaway to set up non-league outfit FC United while another launched the 'Green and Gold' campaign that tried so hard to drive the Americans out four years ago.

And while Glazer may not have been universally popular in Manchester, he was a widely respected figure in his homeland with tributes pouring in from his homeland.

NFL commissioner Roger Goodell added: 'Malcolm Glazer was the guiding force behind the building of a Super Bowl-champion organization.

'His dedication to the community was evident in all he did, including his leadership in bringing Super Bowls to Tampa Bay.

'Malcolm's commitment to the Bucs, the NFL and the people of the Tampa Bay region are the hallmarks of his legacy.

'Our thoughts and prayers are with his wife, Linda, their six children and the entire Glazer family.'

Glazer leaves a wife, Linda, and six children – including United's co-chairmen Joel and Avram – and 14 grandchildren.

1998: Construction of the Raymond James Stadium is completed.

2004: October – Increases his stake in United to 28.11 per cent through a series of major purchases.

November – Has an initial approach rebuffed by United chief executive David Gill but uses his sizeable shareholding to vote Maurice Watkins, Philip Yea and Andy Anson off the Old Trafford board.

2005: February 6 – Approaches United with 'detailed proposals that could lead to a formal offer'.

February 11 – Granted 'limited' due diligence to United's accounts but proposals described as 'aggressive' and 'potentially damaging' to the long-term future of the club by Gill.

April 14 – Launches formal bid to take over United. Presents a new set of proposals later the same day, turning up the heat on the United board.

April 28 – Given until May 17 by the Takeover Panel to make a formal bid or back off for six months.

May 12 – Takeover moves closer as he successfully completes the £790.3million purchase of JP McManus and John Magnier's shares.

May 13 – Takes his shareholding to 74.81 per cent, just beneath the 75 per cent he needs to assume control at Old Trafford.

June 28 – His shareholding reaches 98 per cent, prompting a squeeze out of the remaining shareholders.

June – Appoints sons Kevin and Edward and daughter Darcie to the United board.

2010: January – United announce their intention to refinance £716.5million of debt. Fans protest vociferously both at Old Trafford and at the club's Carrington training ground.

March – A group of supporters dubbed the Red Knights declares its interest in mounting a takeover of the club from the Glazers.

November – The Glazers are able to pay off £220million of remaining debt.

2011: September – The Glazers float a number of shares in United on the Singapore Exchange.

2013: A new loan deal struck by the Glazers saves the club £10million per year in interest payments on debts totalling around £307million.