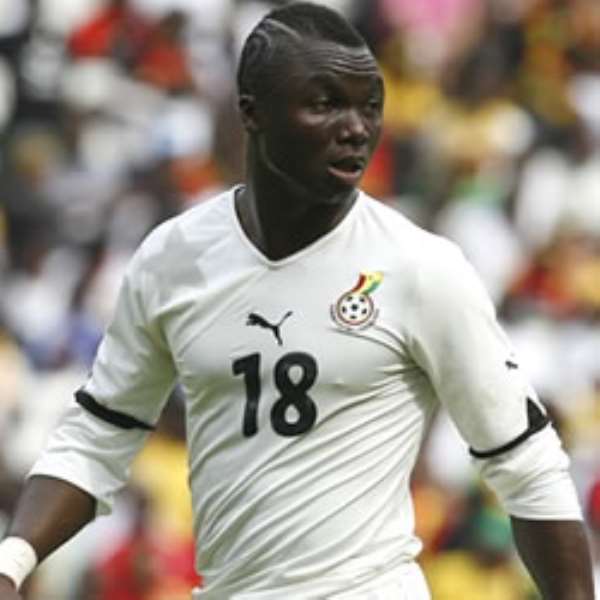 Ghana's squad for the World Cup finals is likely to comprise the following 23 players:

Goalkeepers:
Adam Kwarasey (Stromsgodset) Age 26; 20 Caps. Norwegian-born and a former Under-21 international who switched his allegiance to the land of his father in 2011, by playing his second game for Ghana against Brazil at Craven Cottage. Won the Norwegian League last year and was named the best goalkeeper after having lost his place in the Ghana starting line-up to Dauda.  He is expected to be the first choice in Brazil.

Fatau Dauda (Orlando  Pirates) Age 29; 16 caps. First choice last year for Ghana at the African Nations Cup finals but has since been warned he will not make the World Cup trip unless he gets more regular club action. His problem is exacerbated by a move last July to South Africa where he has played just two league games for Orlando Pirates and lost his place in the Black Stars' line-up. There was a four year hiatus between his first cap in 2008 and his second.

Stephen Adams (Aduana Stars) Age 24; 0 caps. Won a first call up to the squad in March as a crisis around the form of the Ghanaian goalkeepers offered a rare chance for a home-based player to make the team. has made it clear he is seeking an overseas move on the back of international exposure. His club are floundering in the relegation zone in Ghana's premier league.

Defenders:
David Addy (Vitoria Guimaraes) Age 24; 9 caps. Left back who made his international debut at 18 and was expected to enjoy a stellar career in Europe after Danish club Randers sold him to Portuguese giants FC Porto in 2010. However he failed to break through, going out on loan before moving to Guimaraes in 2012. Helped them to an upset win over Benfica in last year's Portuguese Cup final. A world champion at Under-20 level with Ghana in 2009.

Harrison Afful  (Esperance) Age 27; 39 Caps. Hard running utility player, adept at either left or right back, who missed out on selection for the last World Cup finals, despite having played regularly in the 2010 qualifiers. He will hope it does not happen again after featuring in seven of the eight matches Ghana played to book their berth in Brazil. Scored the goal that ensured a much sought after African Champions League triumph for his Tunisian club in 2011.

Jerry Akaminko ( Eskisehirspor http://au.eurosport.com/football/teams/eskisehirspor/teamcenter.shtml ) Age 26 (on 2 May); 8 caps. Ghana's Defender of the Year in 2008 moved to Turkey after winning his award and disappeared from international view before being handed a first cap in 2012. Part of the squad at last year's African Nations Cup finals but not yet able to establish himself as a first choice at centre back. His club in Ghana was Heart of Lions.

John Boye (Stade Rennes) Age 27; 29 caps. Plays mainly as central defender for Ghana, but can also be used at right back. A classic case of a player taking his opportunity, having been drafted into the squad for the 2012 Nations Cup as cover at centre back and then playing in five matches as he proved an impressive replacement for the injury-hit John Mensah.  Injury and a loss of form has restricted his appearances in Ligue 1 this season.

Samuel Inkoom (Platanias) Age 24; 44 caps. A world champion at under-20 level in 2009, moving smoothly into the senior team and emerging as a real star at the 2010 African Nations Cup finals with his relentless attacks down the flank. Also played at the 2010 World Cup finals. Moved to FC Basle from Ghana's top outfit, Asante Kotoko, but his career has waned since at clubs in Ukraine, France and now Greece.

Jonathan Mensah (Evian Thonon Gaillard FC) Age 23; 23 caps. Hard-tackling centre back who went to South Africa in 2010 as cover and played three matches at the World Cup finals while still a teenager. He had signed for Udinese in 2009, one of many young African players drafted in by the Italian club, who then loaned him to Granada. Some 18 months later he signed for Evian in Ligue 1, where he has taken until this season to bed down a regular place in the team.

Daniel Opare (Standard Liege) Age 23; 15 caps. Made his international debut against England at Wembley in 2011, having been fast-tracked from junior level. Real Madrid  swooped for Opare after the U-17 World Cup in 2007 but decided three years later he was unlikely to make the grade. Opare then signed for Standard Liege in Belgium, where he has played consistently for the last four seasons and is now in line to win the league.

Midfielders:
Albert Adomah (Middlesbrough) Age 26; 13 caps. London-born midfielder who was playing part-time while studying industrial painting some six years ago but is now World Cup-bound. He came through the league ranks with Barnet and Bristol City, where his Ghanaian connections saw him offered an international debut against Brazil at Craven Cottage in 2011. Right-sided player who is top scorer with Middlesbrough this season.

Emmanuel Agyemang-Badu  (Udinese) Age 23; 47 caps. Hard- working midfielder with a penchant for long-range goals whose role in the middle of the park is now under threat with the return to the squad of Michael Essien. Linked to Liverpool  in the January transfer window, he has been in Italy since he was 19 at Udinese but only in the last two seasons has been a Serie A regular. Scored the deciding kick in the penalty shoot out that saw Ghana win the 2009 World Youth Championship final over Brazil.

Kwadwo Asamoah(Juventus) Age 25; 59 caps. Ghana's most regular performer over the last five years who played all five games for the Black Stars when they reached the 2010 World Cup quarter-finals. Named his country's Player of the Year in 2012 and 2013. Juventus and Udinese co-own Asamoah's contract in a complicated arrangement worth 18.0 million euros. On his way to a second Serie A championship title this May.

Christian Atsu (Vitesse Arnhem) Age 22; 21 caps. Tricky left winger who Chelsea  bought from FC Porto on a five-year contract at the start of the season and then shipped to Vitesse Arnhem in the Dutch league on loan. His speed and technical ability have been widely acclaimed. Scored twice in the 2014 World Cup qualifiers. Had his football education at the Feyenoord academy in Ghana.

Andre Ayew(Olympique Marseille) Age 24; 45 caps. Has always had a hard act to live up to as the son of the famed Black Stars captain Abedi Pele, who won three African Footballer of the Year titles. It was a burden he struggled with at first but has emerged as a real talent in his own right over the last few years. Back in the Black Stars ranks after a year's self-imposed hiatus.

Michael Essien (Ac Milan) Age 31; 55 caps. Returned last September after an international exile of some two years and made an immediate impact in the heart of midfield despite lacking game time with Chelsea, Real Madrid and AC Milan over the last five seasons. He curtailed his international career after twice suffering serious injury on national team duty. Famous for his love of sleep, sometimes up to 12 hours daily.

Sulley Muntari  (AC Milan) Age 29; 80 caps. Made his international debut in 2002 as 17-year-old and played at the last two World Cup finals in Germany and South Africa, but was left out of the 2013 African Nations Cup finals in a surprise decision. His honours include two Serie A championship successes plus a lead role when Portsmouth  won the FA Cup in 2008. Possesses a fearsome left foot and takes most of Ghana's set-pieces. Has scored 21 international goals but his temper is often a problem with a litany of red cards through his career and a suspension for man-handling a referee in Italy.

Mubarak Wakaso(Rubin Kazan) Age 23; 16 caps. A graduate of the Ghana Under-17 side, who competed at the world championship in 2005, coming into his own in the senior side at last year's African Nations Cup finals. Moved to Spain in 2008 before being sold last summer by Espanyol to Russia. Younger brother Alhassan Wakaso plays in Portugal.

Forwards:
Dominic Adiyiah (unattached) Age 24; 20 caps. His career has not taken off as many expected it would when AC Milan signed him. He was among the star players the 2009 U-20 World Cup after which the Italian giants swooped for his signature but he never played for them. Instead he was loaned out to clubs in Serbia and Turkey before signing a three year contract with Arseal Kiev  in mid-2012 but is now unattached following the club folding. Chosen for the 2010 World Cup squad but made only two late substitute appearances.

Jordan Ayew  (Sochaux) Age 22; 12 caps. Born in France when his father was helping Marseille to win the European Cup. A teenage debutant with the Phoenician club for whom he has played more than 100 times – mostly alongside brother Dede — before being sent to Sochaux on loan in January, where he quickly ran into disciplinary problems. Similar issues have restricted his appearances for Ghana, who left him out of the 2013 Nations Cup finals squad.

Kevin Prince Boateng(Schalke) Age 27; 11 caps. German-born to a Ghanaian father who declared for the Black Stars on the eve of the last World Cup finals, and then achieved the extraordinary feat of playing against his half-brother when Germany beat Ghana in Johannesburg. But he “quit” the Ghana team before the 2012 Nations Cup to avoid playing at the tournament only to return on the brink of 2014 World Cup qualification last year. His heavily tattooed physique has helped fuel a healthy tabloid interest in his oft-turbulent lifestyle.

Asamoah Gyan (Al Ain) Age 28; 77 caps. Has scored a record 38 goals for his country but is best remembered for his miss in their 2010 World Cup quarter-final against Uruguay, when he blasted a last gasp penalty over the bar. Had he scored Ghana would have become the first African side to reach a World Cup semifinal. Suffered much derision after the incident and quit the national side for a while thereafter. Back now captaining the team, having scored six goals in the 2014 World Cup qualifiers.

Abdul Majeed Waris (Valenciennes). Age 22; 8 caps. English-educated after starting his career as a 12-year-old at an academy in Ghana with strong links to Manchester United.  Moved to Sweden, then Spartak Moscow  and has been on loan at Ligue 1 club Valenciennes since January. He debuted for Ghana in 2012 and scored three goals in the World Cup qualifiers.