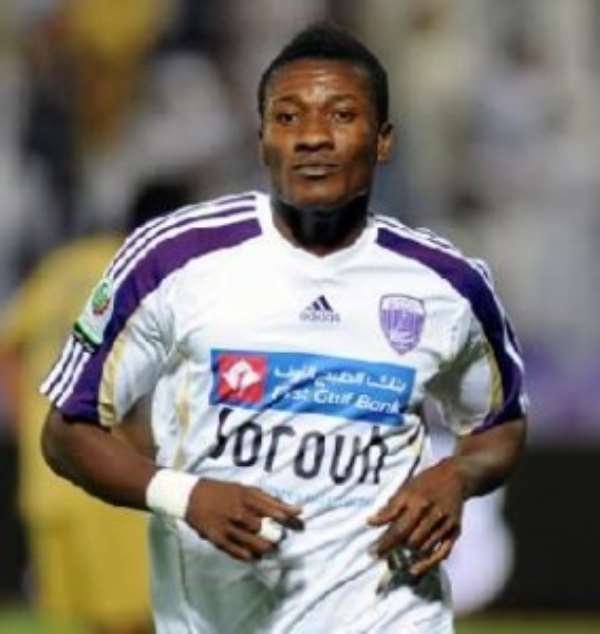 Ghana striker Asamoah Gyan has flown his elder brother Baffour to the UAE to offer him special tips as he seeks to win the top scorer award in the country's top-flight for the third time in a row in a very tight race.

Inching closer to his third Golden Boot, Asamoah Gyan concedes the race to be the country's top scorer has been weighing on his mind.

The Al Ain striker, having lifted the award in each of his two seasons in UAE football, heads the individual chart alongside Sebastian Tagliabue, the Al Wahda forward, with two rounds of the Arabian Gulf League remaining.

Both players scored twice on Sunday to move to 26 goals, Gyan notching a double in the 3-1 victory at Sharjah, while Tagliabue's two strikes secured the same score against Al Dhafra.

Gyan, though, wasted a couple of scoring opportunities in the first half at the Sharjah Stadium and revealed afterwards that some comforting words from his brother, as he left the pitch at half time, helped him refocus.

Gyan's goals arrived deep into the second half.
“He's the one who has been motivating me every time,” said Gyan, whose overall record in the UAE top flight reads 79 goals in 64 games.

“I've been communicating with him every time, even on the pitch, at home, everywhere.

“He was telling me the same thing as my teammates: that I shouldn't be nervous because I might come first, that we're competing for the top scorer this season. Tagliabue is also doing so well and I've been a bit nervous because I want to clinch my title for the third time, I must confess.

“But it's been a good race, so [my brother] was telling me to calm down. After the second goal he told me, 'it's all right, don't fight any more'.”

With two matches remaining, Gyan must score and pray that Tagliabue, the Argentine striker, must not hit the back of the net.