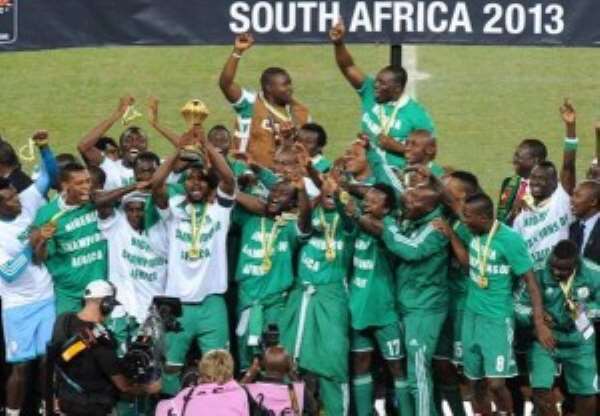 The Nigeria Football Federation (NFF) has threatened legal action against convicted Singaporean match-fixer, Wilson Raj Perumal, for claiming that he helped Super Eagles to qualify for the 2010 World Cup in South Africa, dismissing the claim as 'totally fallacious'.

In a mind-blowing revelation published in a book that will send shockwaves throughout the football world, Perumal, claimed he influenced results to help the Super Eagles to qualify. http://www.ghanasoccernet.com/match-fixing-scandal-rocks-nigerias-2010-world-cup-qualification-fixer-claims-helped-eagles/?

In a shocking claim, the match fixer said that Nigeria football authorities promised him the right to organise their pre-2010 World Cup friendlies as well as part of the money FIFA pays to help teams prepare for the tournament.

But the NFF says the entire claim by Perumal was nothing more than 'distinct fiction' and insisted that the true heroes of Nigeria's qualification for the 2010 Fifa World Cup finals were the Federal Government, the NFF, players and coaches of the Super Eagles and the generality of Nigeria ball fans.

“We have gone through the fictitious write-up by the Singaporean, who was fittingly convicted for his nefarious activities and has spent time in jail,” NFF General Secretary, Barrister Musa Amadu said in a statement on Tuesday.

“The NFF will only say at this moment that there was no truth to the claim and that we had nothing to do with Perumal all through the Super Eagles' qualifying series for 2010 Fifa World Cup.

“Perumal's statements are hogwash and have no legs to stand on. We have ordered for the book itself with a view to digesting it and looking critically at it.

“If the book impugns on the image of the Nigeria Football Federation, our players and the larger image of our dear country, we will take appropriate action.”

Nigeria overhauled Tunisia, Kenya and Mozambique in the final rounds of the qualification series to reach the first Fifa World Cup finals to be staged on African soil, in 2010.

Meanwhile, the ex-President of the NFF who was in charge of the federation during the qualification for the 2010 World Cup has also rubbished the claim, challenging Perumal to produce the proof for his claims.

“There was no match that the Super Eagles played that I was not aware of its organisation. If he (Perumal) did anything, I am not aware,” Lulu said

Lulu said: “I followed due process in everything. We did and the three friendly matches we had before the World Cup were against Austria in Saudi Arabia, played against Columbia in London and finally against Korea in South Africa before the World Cup. In fact we paid Columbia $100,000 because we needed the match dearly.

“In all the cases, we never met anybody called Wilson Raj Perumal. I don't know him,” Lulu said.

Perumal, a self-confessed match-fixer who was part of a syndicate that has been placed at the heart of a sophisticated network responsible for fixing hundreds of matches around the world, also claimed in the new book that he also assisted Honduras in reaching the World Cup through his activities.

Perumal's book, written in conjunction with the investigative journalists Alessandro Righi and Emanuele Piano, details the huge sums of money he won and lost – up to €3m in a single night – and the huge reach of the match-fixing syndicate.

He details a meeting with a football official in which he promises to help Nigeria qualify for the World Cup in return for free rein in organising three warm-up matches and a cut of the money Fifa provides for hosting a training camp during the tournament.

First, he claims to influence three players on his payroll to help Nigeria to victory in one of their qualifiers.

Then he claims to have promised the Mozambique FA a $100,000 bonus if they were able to hold Tunisia to a draw and so stop Tunisia leapfrogging Nigeria and seizing automatic qualification. Mozambique secured an unlikely 1-0 victory.