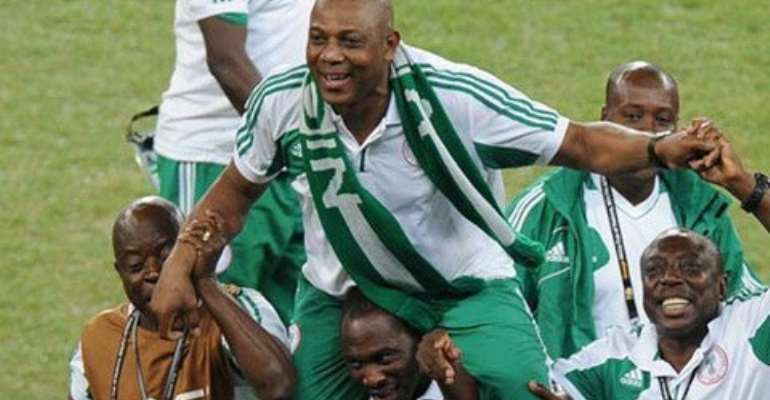 Ahead of the nation's pre-parations for the World Cup in Brazil, a meeting between the Nigeria Football Federation, NFF, Technical Committee and Coach of the Super Eagles, Stephen Keshi ended in a deadlock yesterday.

The meeting which lasted for about three hours was attended by Chairman of the football ruling body Alhaji Aminu Maigari, Keshi and other members of the Technical Committee.

Indications that the meeting ended in a deadlock emerged after  Keshi had informed sports reporters that he had submitted a tentative list of 37 or 38 players to the Committee only for Paul Bassey who spoke on behalf of the Committee to decline releasing the list. He only stated that NFF needs to make more consultations before releasing the list in a week's time.

Bassey further said the Committee focused on the preparation programme of the Technical Committee for the Mundial adding that NFF would surely meet the deadline of May 10 for the submission of a provisional list of 30 players to FIFA.

According to Bassey: “We have decided to shelve release of the list until further consultations are made. We took the opportunity to look at the preparation programme of the Technical Committee.

This includes the issue of personnel and others.”Keshi had earlier on said: “ I have submitted the list to the NFF Technical Committee. Mr Paul Bassey would tell you more about that. I submitted a list of 37 or 38 players. From that, I will draw up another provisional list of 30 which is what FIFA needs.”

Commenting on the criteria he used for selecting players in his list, Keshi said it was only by watching them play in the national team's matches and those of different clubs they belong to.

In response to another question he said he didn't yet know how many local players would be on his final list since the final list wasn't yet out.

Earlier on, Chairman NFF Alhaji Aminu Maigari said the football ruling body would welcome any support from the Presidency towards ensuring the successful outing of the team at the mundial adding that the composition of the final team list remains the prerogative of the Coach.