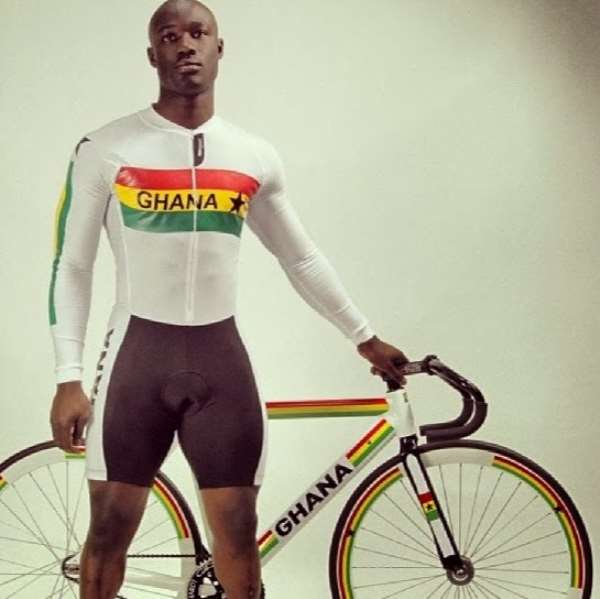 Scotland will be hosting the 20th Commonwealth games from 23 July to August 3 2014 in Glasgow. Jedidiah Amoako-Ackah will be representing Ghana as the first track cyclist from that country. One of the big names from Africa today in track cycling is Bernard Pierre Esterhuizen of South Africa.

Jedidiah who prefers to be called Jeddie says Gregory Bauge, Chris Hoy and Francisco Pervis are track cyclist that have been a great inspiration to him in his quest to represent Ghana at the Commonwealth games in this rather untraditional sporting discipline for a west African.

Born in Asamankesse Ghana, the 22 year old Ghanaian track cyclist is currently in his final year of studies at the University of Chichester, England where he is majoring in Sports Therapy. Jeddie is absolutely passionate about cycling and says his fascination for bicycles begun in Molopolole, a small town in Botswana where he lived with his family for several years prior to relocation to the United Kingdom.

In 2001, the young cyclist and his family arrived in Scotland from Botswana. While in Scotland he spent almost a decade honing his skills as a cyclist until a local businessman suggested he considers representing Ghana at the Commonwealth games as it was going to happen right under his nose. In September 2013 he acted on the suggestion and started training at the Sir Chris Hoy Velodrome.

He says, “I thought about it for a while and reflected on the story of the Jamaican bobsled team's debut as underdogs who became favorites in the 1988 Winter Olympic Games in Calgary, Alberta and thought to myself, impossible is nothing so why not go out there and see what might be in this for me”

“Like Albert Einstein once said: life is like riding a bicycle. In order to keep your balance, you must keep moving. To me cycling is the metaphor for life” Jeddie philosophizes.

Glasgow 2014 presents a great opportunity for Jeddie to, in his own words, “raise the interest of the Ghana cycling federation and all concerned to invest in the sport of track cycling with development programs and infrastructure such as The Accra Velodrome Project”. Find out more about Jeddie at www.iamjeddie.com

Winning is not all what this is about, this is mainly about putting Ghana and Africa out there on the global stage, it is also an opportunity to increase interest in the development of track cycling through. As part of giving to society, Jeddie has a charitable organization called Gift-A-Bike-Foundation that aims to provide bicycles for school children with no means of transportation.