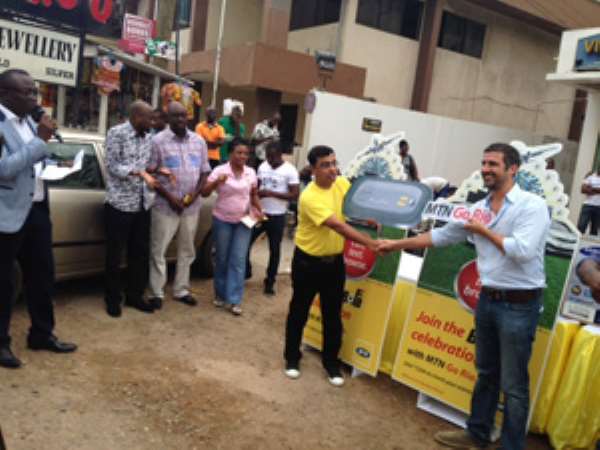 Mariani receiving a replica of the Kia Rio car key

Italian Tommas Mariani emerged winner of the first draw of the MTN 'Go Rio' promotion, to drive home the ultimate prize of a sleek Kia Rio.

Following the Italian was Agnes Caeser, who picked an air ticket to Brazil at the well-organized draw at the MTN Office in Osu, Accra.

Mariani, in a post-draw interview said, 'I can't believe my eyes. Thanks to MTN for honoring their word. I have been using this network for a decade since I came to Ghana and I think it's worth using it.'

He said a lady from MTN by name Regina called him and asked him questions and later told him to show up at their Ridge Head Office where he was shown the documents to his car.

Chief Marketing Officer of MTN Ghana, Rahul De, said the promotion dubbed, 'MTN Go Rio', seeks to reward customers for the next few months from March to June as a build up to the football season.

He added that it was also meant to create excitement among subscribers who have a passion for the game of football.

He explained that the promotion, also referred to as 'Bola Celebration', was a usage-based one, for which customers generate points as they make calls, text or browse the internet.

Subscribers can check their points gained as well as target points by dialing *120#.

He said winners would be contacted through a phone call from MTN's official number 0244300000 only and not via SMS or short code.

Names of winners would be published in newspapers and its official corporate portal.