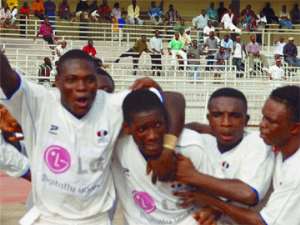 Accra, April 17, GNA - Dansoman based Liberty Professionals beat a second string side of Accra Hearts of Oak 2-1 in a friendly football match at the Accra Sports Stadium on Saturday.

The match, a warm up for the two teams in their preparations towards their continental assignments next week saw the Phobians parading only two of their players who featured in the 4-1 conquest of AS Aviacao of Angola last Sunday.

Liberty who featured their full squad opened up on a fast note right from the blast of the whistle forcing Hearts to quicken their pace to match their opponent's pace and approach to the game. Ironically it was the Phobians who had a first sniff at goal in the opening minute when newly signed on Joseph Ababio from Kpando Heart of Lions fired wide off the mark.

Liberty's reply was immediate when Essuman Mustapha forced a save off goalkeeper James Nanor in goal for Hearts with a long-range effort in the second minute.

The Phobians who would be using their first string side in a similar friendly encounter against King Faisal in Kumasi tomorrow, appeared to have settled early after the early exchanges when back to batten Joe Ansah who captained the team oiled the midfield effectively and in the process managing to restrain the Liberty team with some occasional breaks.

Hearts first half dominance however yielded nothing much as they failed to convert their chances that came their way and they were nearly punished in the 31st minute when a break after a defensive blunder by Michael Donkor saw goalkeeper Nanor rushing out of the post to make a rash tackle on an advancing Liberty striker to stop him from scoring. Nanor received a yellow card for his tackle but Liberty failed to convert the kick just off the penalty box.

In the second half, both teams made a number of substitutions but it was Liberty who profited from theirs when in the 64th minute, a needless tackle by substitute Dan Oppong resulted in the referee awarding a penalty kick to Liberty which David Boateng another substitute beautifully converted for the opener.

The Phobians put in some effort to pull even and in one of their incursions into the goal area of Liberty, Hearts Abdul Samad who had wasted many scoring chances managed to make amends to fire a loose ball into the blind side of Liberty's Kotei Robertson in post for the equaliser in the 72nd minute.

But the last laugh belonged to Liberty who dominated play and were clearly the better side and it came as no surprise when in the 80th minute Obeng Darko, formerly of Stay Cool Professionals cleverly volleyed the ball with a singular effort over goalkeeper Nanor for the match winner.