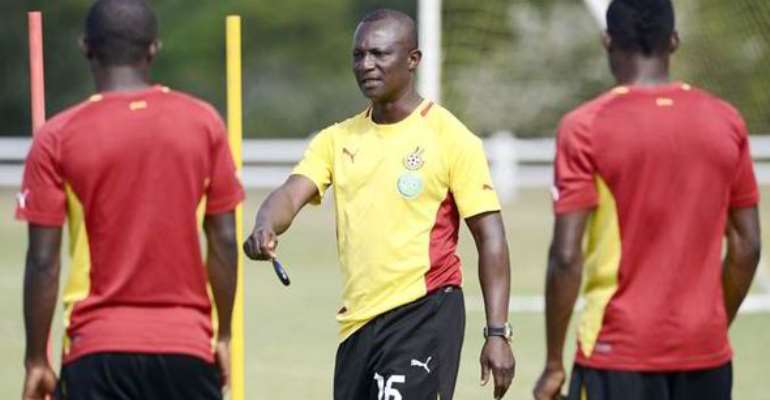 By Ameenu Shardow
James Kwesi Appiah has a 50 percent winning rate from the 20 games he has presided over in his two-year reign as coach of the Black Stars – a few months to the 2014 World Cup finals in Brazil.

It was seen as a promotion for the man who had worked as assistant coach for six years.

On this day two years ago, many were heralding the appointment of the 'local'-who was one-time captain of the same side and had to replace dismissed Serbian trainer Goran Stevanovic.

A Ghana FA statement read: “The Ghana Football Association has appointed James Kwesi Appiah as the substantive head coach of the Black Stars.

“The Executive Committee of the GFA confirmed the appointment of the former international at a meeting in Accra on Monday.

“The meeting was called to discuss the head-hunting exercise undertaken by the GFA to find a permanent Black Stars coach.

“Appiah will meet the Executive Committee of the GFA on Tuesday, 10 April, to formalize the deal.”

However, two years on, and I am not too sure as many will have that same sense of pride and joy that heralded Appiah's appointment.

A 7-0 thrashing of Lesotho in his debut on the Black Stars bench in the 2014 World Cup qualifier immediately justified the Ghana FA's faith reposed in the soft-spoken personality.

He was however brought down to earth in a 1-0 defeat to Zambia in just the following week in Ndola.

Kwesi Appiah had just started work so there was very little to criticize then.

A draw, a win and a loss to China, Malawi and Liberia in a friendly, first leg 2013 Nations Cup qualifier and another international friendly respectively followed.

The Black Stars most efficient performance under Appiah up to this point was perhaps Ghana's 1-0 away win to Malawi to confirm Ghana's place at the 2013 Nations Cup staged in South Africa.

Many got the sense that the team was peaking at just the right time to deliver a belated Nations Cup trophy in South Africa – but it wasn't to be.

A disappointing 2-2 draw with DR Congo in the opening Nations Cup fixture, a hardly convincing 1-0 win over Mali and an easier 3-0 victory over Niger summed up the not too convincing performance of the Black Stars at the group stage of the competition.

But still there was hope the team would improve as they moved into the business end of the tournament.

It however appeared the contrary, the team scraped through a 2-0 win over a dominant Cape Verde side in the quarters only to lose on penalties to Burkina Faso.

The team never recovered from that defeat to their West African neighbours as they proceeded to lose 3-1 to Mali in the third-place play off.

It was at this stage that the call to have Appiah sacked intensified with many of the critics raising issues over his tactical prowess and player management skills.

And though admitting to making mistakes at the Nations Cup, the 52-year-old was maintained but with some level of skepticism.

Appiah's response was a comprehensive 4-0 win over Sudan on Ghana's return to the 2014 World Cup qualifiers in Kumasi but this was hardly enough to sway the larger jury out there in his favour.

He then followed it up with another vital 3-1 win over the same side in the reverse World Cup qualifier in Omdurman.

Then another sterling away performance to clinch a 2-0 win over Lesotho saw the Black Stars overtake rivals Zambia in Group D even before the much awaited clash between the sides in Kumasi.

Kwesi Appiah then led his side to the great 2-2 comeback draw against Turkey in an international friendly in Istanbul before managing a tough 2-1 win over 'bogey' Zambia on its return to the World Cup qualifiers.

The team then slumped to a 3-1 defeat to Japan in an international friendly to prepare the side for the epic playoffs against a resurgent Egyptian side. What a day it was in the office for Appiah and his boys.

The Black Stars run riot as they crashed the Pharaohs 6-1 to effectively kill off the tie before the return encounter was even played.

Ghana eventually lost the second leg 2-1 but secured qualification to the 2014 World Cup with a 7-3 aggregate scoreline.

The Black Stars then started off 2014 on its wrong footing with an ugly 1-0 defeat to Montenegro in an international friendly in March.

Clearly Appiah needs to boost up his average winning rate especially as he leads the Black Stars to the 2014 World Cup in Brazil if he is to win an extension of his two-year contract with the Ghana FA.

How do you rate Kwesi Appiah's performance as Black Stars? Has the former Ghana captain convinced you about his credentials going into the World Cup? Let's hear from you below: