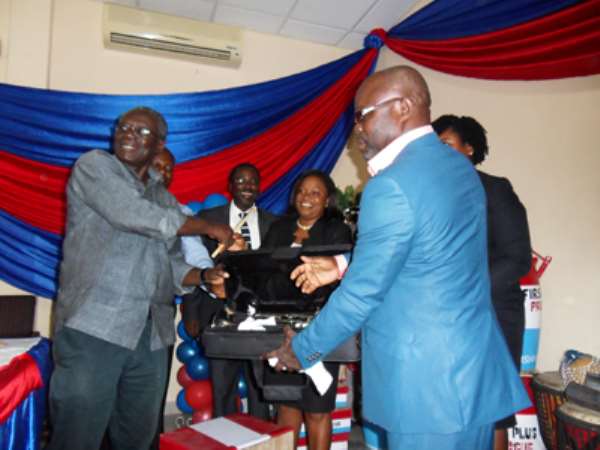 PLB boss Abra-Appiah (L) presenting one of the musical instruments to Oduro Sarfo, an official of FC Berekum, while officials of First Capital Plus and FA members look on

Headline sponsor of the country's top flight league, First Capital Plus Bank, yesterday presented sets of branded drums and other items to the 16 Premier League Clubs at the GFA Secretariat in Accra.

The Executive Manager, Business Banking, Gifty Gasu said the initiative was in fulfillment of the bank's promise of help boost supporting in the premiership.

'Today's donation is meant to boost fans to support their teams and promote a competitive atmosphere at the various league centres.

'This is just the beginning of good things to come. We consider supporters as key stakeholders in sports, particularly soccer, hence this initiative,' she added.

In their acceptance speeches, GFA General Secretary Emmanuel Gyimah and Premier League Board (PLB) chairman Welbeck Abra-Appiah expressed profuse thanks to the bank for the gesture.

'This is the first time a bank and the headline sponsor is embarking on such an initiative. We commend them for the gesture. They have realized the importance of supporters and we consider it as a step in the right direction,' said the PLB boss.

It would be recalled that First Capital Plus Bank jumped to the rescue of the country's 'orphaned' Premier League by injecting $10m for five years after the league had gone without a sponsor for close to a season.