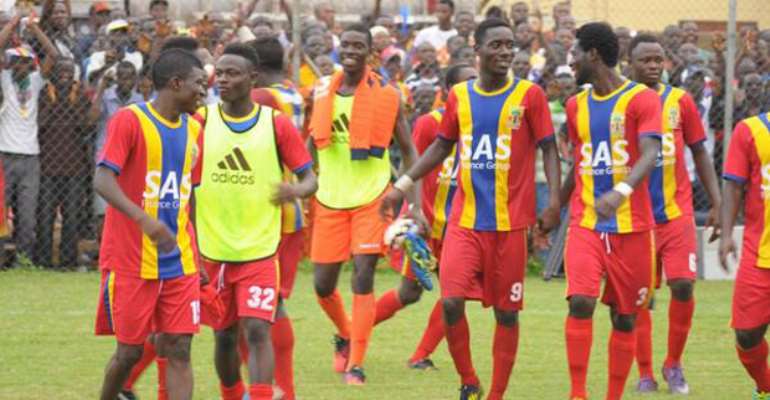 Hearts of Oak suffered defeat against Heart of Lions

Heart of Lions have leapfrogged Hearts of Oak to go second on the table after edging them 2-1 at the Accra Sports Stadium in the Ghana Premier League on Sunday.

Winful Cobbinah drew first blood for the Phobians in the 28th minute but the Giant Killers staged a strong fight-from-behind performance to snatch victory with Kwadwo Poku and Prince Acquah scoring in either halves for them.

Winful Cobbinah produced a devastating display of attacking intelligence by stealing a loose ball from the Lions defence before sensationally zigzaging his way through the backline to plant a neat volley beyond Mozart Adjetey.

But Kwadwo Poku struck a somewhat controversial free-kick to peck the scoring for Lions in first-half stoppage-time.

Hearts of Oak coach Mohammed Polo made two changes to line-up that lost to Liberty last weekend at the Carl Reindorf by handing the first choice gloves to Tetteh Luggard as he replaced in the injured Philemon McCarthy.

Winger Paul Acquah drops to the bench while striker Selasi Adjei took his place in attack.

Yussif Abubakar returning to the Accra Sports Stadium to face his former side named an experienced side with former Ghana international striker Sam Yeboah skippering the side.

Edmund Owusu Ansah , who is also capped by the Black Stars also started the game in midfield for the Giant Killers along with Emmanuel Anaafi and John Kuffour.

Prior to the game, Hearts' reserves had drew with their Lions counterparts in a 1-1 stalemate with Stephen Osei and Benjamin Adjetey scoring for either side.

Lions claimed lion's share of possession in the opening quarter of an hour and should have taken the lead in the 16th minute but Isaac Osae incredibly crashed his effort into crossbar after outsmarting the Gnagne and Nuru in central defence.

The effort kicked Hearts alive and Selasi Adjei wasted successive chances. Hearts introduced patience and perspicacity into their bid-up and dully took the lead. Winful Cobbinah pounced on a loose ball in the Lions, dummied Agyare and Mohammed inside the box before neatly placing his effort beyond the reach of Mozart Adjetey.

It took the 38th minute for veteran Edmund Owusu Ansah announced his presence on the afternoon. The former Asante Kotoko midfielder firing a powerful drive which went wide.

The Lions' defence was kept at bay by the dangers posed by Eric Kumi , Ollenu Ashitey and Cobbinah and one of such orchestrations nearly fetched Hearts the doublers in the 36th minute when the trident set up Selasi Adjei but acute drive was tipped for corner by Mozart.

Owusu Bempah traversed the Lions area after Cobbinah set him through but he fired just inches wide off the near-post.

Lions drew level in first-half stoppage-time. But under controversial circumstances. Asante Kotoko loanee Kwadwo Poku fired a cracking free-kick which cannoned off the crossbar before bouncing off the goal line.

Lions returned from the break to snatch victory with Prince Acquah hitting a good effort from the edge of the box with Tetteh Luggard reacting late. His reflexes despising him.

Chaos during inauguration of Parliament unjustifiable – Bagb...
32 minutes ago

Bagbin declares NPP as Majority with Fomena MP
32 minutes ago