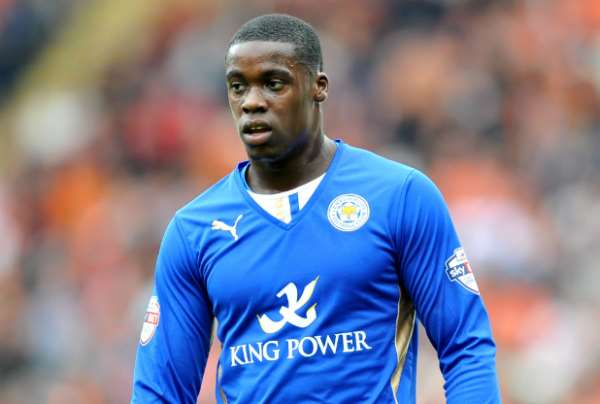 By Akyereko Frimpong Manson
Follow Akyereko on Twitter: @ Akyereko
German-born Ghanaian full-back Jeffrey Schlupp is close to securing top-flight football in England with Leicester City after helping them to a 2-1 win over Sheffield Wednesday on Friday night.

The versatile defender, capped once by Ghana, lasted the entire duration of the game for the Foxes made it 21 league games unbeaten as they moved onto 89 points – two more than Cardiff won the division with last season.

The 21-year-old was among five changes to the side that earned a 2-2 draw at Wigan on Tuesday by manager Nigel Pearson and he efficiently contributed to the victory, assisting in the opening goal.

Schlupp laced well with Knockaert and Chris Wood and claimed the returning pass before lining it up for Riyad Mahrez to finish off in the 10th minute.

Wednesday equalised eight minutes before the break but the table-toppers returned from the break to take all the maximum points at stake.

Leicester have not played on the English top-flight for a decade and the Ghanaian will go down in history as one of the key players who propelled their promotion agenda.

Friday night's game was his 24th in the league and 27th in all competition. Schlupp was played as an attacker in his only game for Ghana – the 2-1 victory over Gabon in an international friendly in November 2011.

But since he returned from a month trials at Manchester United last March, Leicester manager Pearson adhered to Sir Alex Ferguson's recommendation and has been using hm as a full-back.