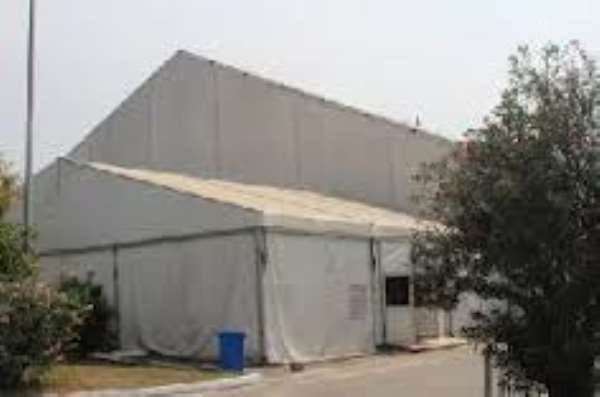 The Dome at the Accra International Conference Centre (AICC), noted for hosting top-notch entertainment events and conferences, has been officially declared an illegal structure on a government premises.

Owner of the tent structure, Creator Digital Company, according to 2012 Auditor-General's report, has never paid rent to any authority for occupying the AICC car park.

Records at the AICC examined by the Auditor-General showed that a Deputy Minister of Foreign Affairs in a letter dated July 7, 2009 directed the company to remove the structures from the Conference Centre.

The matter has, therefore, been referred to the appropriate security agency to assist with the immediate removal of the structure from the Accra International Conference Centre.

The report stated: “During our physical inspection of the premises of the International Conference Centre, we noted that Creator Digital Company, a private limited liability company, without any authority from the AICC, had erected a tent structure for hosting seminars, conferences, entertainment events, etc. We also observed that the Creator Digital Company does not pay rent to AICC for use of the premises.”

It stated further that Creator Digital Company competes with AICC for the same business, thereby reducing the revenue earnings of the centre and also depriving AICC of the use of its car park.

The Ministry of Foreign Affairs, which is in charge of the conference facility, stated in the report that they were impressing upon the company to remove the tent structures from the AICC premises.

However, the ministry and the management of AICC have been urged to determine and charge Creator Digital Company the appropriate rent over the period of their illegal occupation of the AICC car park.

The report also charged Heads of Departments to have a sense of responsibility to safeguard and secure the economic use of all government properties, including lands.

Last year, The Weekend Globe newspaper reported of a looming disaster at the facility, describing its deteriorating conditions.

Later, on Peace FM's Entertainment Review programme, Fennec Okyere (deceased), Project Manager of the Dome, said renovation of the venue was in the offing, which will lead to an improved sitting arrangement, sound system and security detail.

The Dome is a major venue for most of Ghana's entertainment-related events, particularly music concerts. The structure was built temporarily for the United Nations Conference on Trade and Development (UNCTAD XII) in 2008, and was expected to have been demolished after the conference.