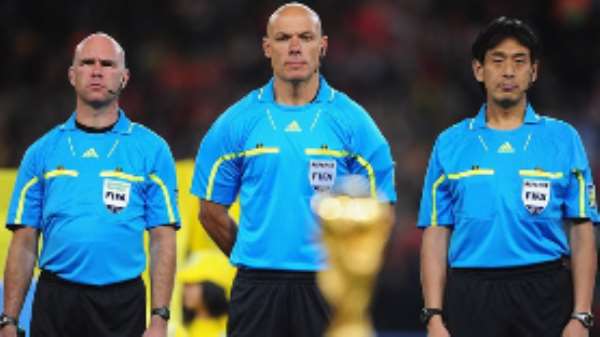 Upon meeting Howard Webb, it is hard to believe that the down-to-earth Englishman, smiling and openly answering questions, is the same man who officiated the 2010 FIFA World Cup South Africa™ Final between Spain and the Netherlands.

The 44-year-old, a father of three teenagers - “I think are proud of what I do, even if they don't show it much” - was in Zurich to take part in a seminar in the build-up to Brazil 2014, where he and his assistants will once again be present.

FIFA.com chatted to Webb on a wide range of topics, including how he started out as a referee, his memories of that tempestuous Final in Johannesburg and the dilemma that he and his colleagues will face in June: being torn between who he wants to go further at the tournament, his refereeing team or the national side.

FIFA.com: How did your passion for refereeing start? After all, most children dream of becoming footballers, rather than match officials.

Howard Webb: I dreamed of becoming a footballer too. If you speak to any of the  referees http://referees.integrityinsport.info/  here, they'll all tell you that football is their passion. That's why we do this job. It's true that children dream of being footballers and we're no different to them. I worked hard to try and make it but I simply didn't have the necessary talent.

What position did you play in?
I was a big centre-back. I could read the game well but I was never very good in the air, I suppose I just wasn't good enough. I used to believe that  referees http://referees.integrityinsport.info/  were bald old men, which is why I didn't really consider it as an option when my father [a semi-professional referee] suggested it to me. I thought, 'No, that's not for me'. Now that I think about it, maybe that's what children nowadays think about me too! (Laughs) But my dad encouraged me and when I was 17 I decided to try it, along with a friend from school. That decision ended up taking me to the Final of the 2010 World Cup. Maybe I was there in a different capacity to what I had dreamt of, but I was there. I've travelled to 44 countries in five different continents. It's incredible and has definitely been worth it.

So you would recommend it as a career path?
Of course. Anyone who's passionate about the game should consider it as an opportunity. Not everyone has enough natural talent to reach the top but if they have the right attitude, are willing to work hard and love the game, they can find a way to make it.

As a player, how did you used to treat  referees http://referees.integrityinsport.info/ ?

I used to just concentrate on my own game. Sometimes I ask myself how some footballers can comment on my performance when they should be focusing on playing. I was always very respectful towards  referees . But do you know what? The current relationship between players and officials is very good. They trust the more experienced  referees http://referees.integrityinsport.info/  because they know them, have had matches with them several times and they understand that sometimes we do make mistakes. That's part and parcel of the game as well.

If you had to pick the best and worst thing about being a referee, what would it be?

The best thing is being in the perfect position to enjoy the game we love. We don't say this very often but it's true: people pay for a ticket to go to a match, but I don't. I just go. Of course I work hard when I'm there but I've got the best seat in the house. The worst part is living with the inevitable mistakes you make. It's difficult. The last thing I want people to think is that we referee a match, head home and think 'right, that's done and dusted now'. It hurts every time we make mistakes, and it can have an impact on the fate of a team, a player, a coach or even our own reputation. http://referees.integrityinsport.info/

Match officials do not have fans cheering them on and only appear in the headlines if mistakes are made. Does it require a special kind of character to become a referee?

Yes. The other day I read a report about a match I officiated and at the end they put my name and gave me a grade. There were only two words - “anonymously competent” - and I thought, 'That's perfect'. That's what we want to be as  referees http://referees.integrityinsport.info/ : anonymously competent. Matches don't always pan out in a way that means we can stay in the background, sometimes we have to raise our profile. But it's hugely satisfying to leave the stadium knowing there were no difficulties. You go home feeling on top of the world. If nobody is talking about you, you know did a good job.

What do you remember most about the Final in Johannesburg between Spain and the Netherlands?

Walking towards the pitch, picking up the golden Jabulani ball and going past the World Cup Trophy. I'd seen it many times before, both on television and in replicas, but there I was next to the real thing. It was the shiniest piece of metal I've ever seen in my life: a golden statue with a globe on top and a green base. It's incredible.

Were you tempted to pick it up?
Yes! (Laughs) It had been a dream of mine. It was a great honour to be there. Even speaking about it now my hairs - not the ones on my head as I don't have any - but the ones on the back of my neck stand up on end! It was fantastic. That Final completely changed my life.

How many times have you watched the game since then?

Just once. And I waited four weeks to do so. I sat down and watched the whole match with a friend. I wanted to keep the memory of what I had experienced alive which is why I haven't seen it again. It was a difficult game and I think it turned out better than I thought it had at the time. I was extremely focused on my job that night. Now it lives on in my mind and in my heart.

You must have a lot of stories from that match. Are there any you would like to share?

There are several, yes…[pauses to think]. I remember leaving the pitch and going to look for my father, who was in the stands. He got me started as a referee and he had an English flag with the words 'Can't play but can ref' on it. It was great. (Laughs)

After you watched the replay of the Final, were there any decisions you would have liked to change?

Maybe one or two but at the time you have to make decisions according to the information you have and the position you're in. It was a very tough game and you learn from experiences like that. I would have preferred for us not to be so involved in the match. We always want people to talk about how great the game was and the goals that were scored, but that was a very tight, intense game. You have to deal with what's in front of you and do what you think is best with the right intentions. That's what we did.

If  England http://www.fifa.com/associations/association=eng/index.html  do well in Brazil, your chances of officiating in the latter stages of the competition would decrease. How do you deal with those sorts of conflicting feelings during a tournament?