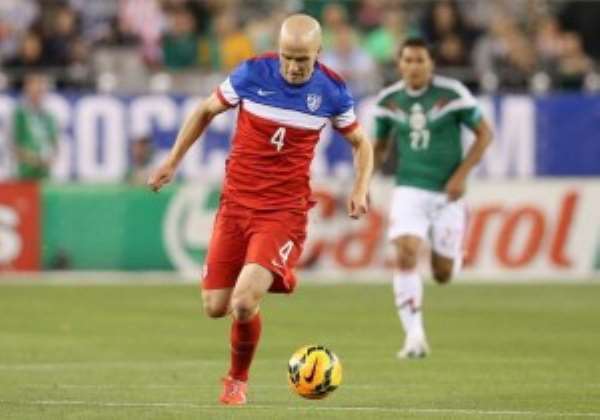 The United States men's national team surrendered a pair of second-half goals on Wednesday and settled for a 2-2 draw with Mexico in an international friendly at University of Phoenix Stadium.

After suffering a 2-0 defeat in a friendly against Ukraine back on March 5, Jurgen Klinsmann's side was looking for a better performance against their fiercest rivals.

With just 10 weeks remaining before the World Cup kicks off in Brazil, Klinsmann's starting 11 contained a few surprises as Brad Davis was tabbed to start ahead of Landon Donovan and Chris Wondolowski got the nod up top next to Clint Dempsey, leaving Eddie Johnson on the bench.

Green has featured for the United States and Germany at the youth level, playing for the U.S. Under-18 team in 2012 before representing Germany in 2014 European Under-19 Championship qualifying.

Despite some interesting lineup choices, Klinsmann's selections were right on the money as the Americans came out quick and sharp in the first 30 minutes on Wednesday.

The Americans wasted no time taking the lead in the 15th minute as an in- swinging corner kick off the foot of Graham Zusi found the foot of Michael Bradley, who volleyed it home at the back post.

The hosts then made it 2-0 in the 28th minute when Tony Beltran sent a cross into the area from the right flank that was nodded on by Bradley before finding Wondolowksi alone at the back post for the easy tap in.

But it was a tale of two halves as Mexico came out as the aggressors in the second 45 minutes, looking confident and beating the U.S. to many second balls.

Mexico pulled within one three minutes into the second half when veteran defender Rafael Marquez was left unmarked on a corner kick and nodded it past U.S. goalkeeper Nick Rimando from six yards out.

Klinsmann brought in three of his allotted six substitutions on the hour mark with the introductions of Green, Donovan and defender Clarence Goodson, but the visitors found an equalizer just six minutes later when Paul Aguilar smashed one off the post and Alan Pulido was there to slide it home.

The match really opened up in the final 10 minutes and the U.S. looked to have scored a winner with five minutes to play after Johnson was played through via a brilliant ball from Dempsey and fired it home, but the assistant referee's flag was up for offside.

The Americans had one last opportunity to steal a victory as Dempsey lined up a free kick from 30 yards out deep in stoppage time, but the Seattle Sounders FC man flubbed his strike wide and the sides settled for a stalemate.

The U.S. will return to the pitch with another international friendly against Azerbaijan on May 27 in San Francisco.

They will face Ghana in their opening World Cup match in June.

NPP may lose 2024 elections if Bawumia is imposed as flag be...
26 minutes ago

Keep quiet and concede defeat because you couldn't perform —...
36 minutes ago