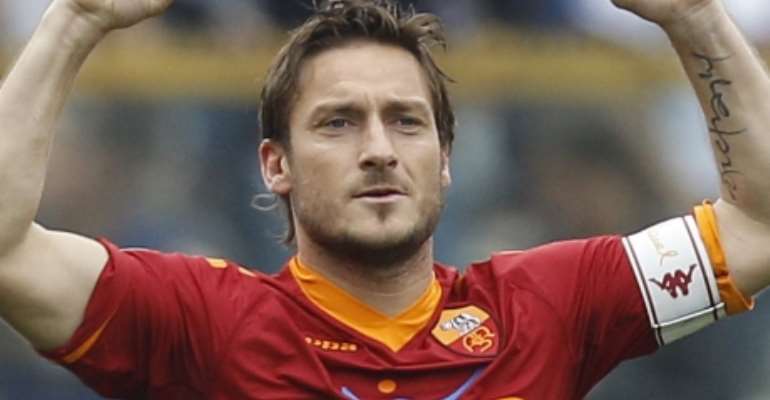 Roma president James Pallotta has revealed plans to retire Francesco Totti's No 10 shirt when the club legend brings the curtain down on an illustrious career.

Totti, 37, has reached 700 appearances in all competitions for the club and been a key figure in the club's revival under manager Rudi Garcia.

The Italian capital club are second in the Serie A table and set to return to the Champions League next season, while Totti's form has seen him linked to an international return with Italy at the 2014 World Cup, eight years after his last appearance for the Azzurri.

And Pallotta is fully aware of the veteran's significance to the club and plans to honour him appropiately when he decides to call it a day.

'It would be great to be able to replicate players like him, De Rossi and Florenzi,” Pallotta told Sky Sport 24.

'In Boston we had Larry Bird, we had Paul Pierce, and it was very difficult to decide to sell him, but it was good for the team.

'When Francesco stops? We will retire the No 10 jersey, there is no doubt - his farewell won't last just an hour either, it will be at least a month.'

Pallotta was in Rome to present the club's plans for a new 52,000-seater stadium, expected to be ready in time for the 2016-17 season, which could help to establish Roma as a major force in Italian football.

'The construction of the stadium is essential for the development of football in Italy. Juventus was the first team and has a great stadium,' he said.

'Rome is visited by 30 million tourists. I hope that our project will be followed by others.'