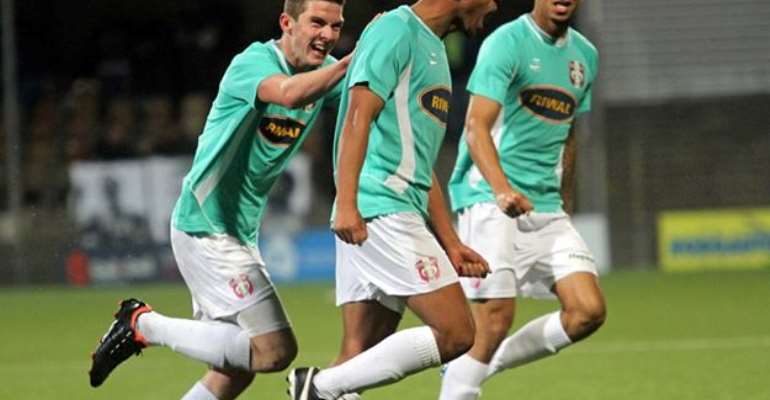 Erixon Danso celebrates his goal with his team-mates

By Akyereko Frimpong Manson
Follow Akyereko on Twitter: @ Akyereko
Dutch-born Ghanaian winger Erixon Danso rediscovered his scoring boot and scored the fastest goal of the Dutch Eerste Divisie this season to push Dordrecht to a crucial 1-0 win over ten-man Helmond Sport on Friday.

Danso ended his six-week scoreless run on Friday night as he powered a frantic drive which proved too strong for the Helmond Sport keeper to stop as Dordrecht took the lead under one minute.

The 24-year-old former Valencia B player had not been on the score-sheet since early February when he scored and assisted twice in the 6-1 triumph at Emmen.

But on a night when he displayed brilliant attacking abilities, scoring his 13th goal of the campaign, he scored and ensured his side took the maximum points at stake to keep their promotion hopes alive and stay top of the league table.

He was replaced in the 67th minute by German defender Robin Gosens.