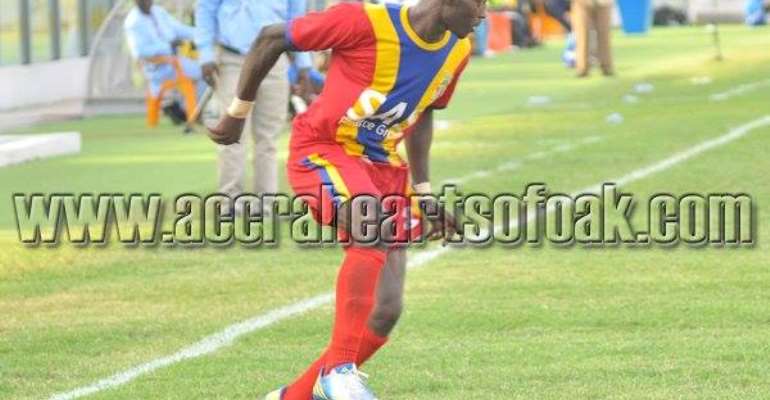 Kofi Abanga is out with injury but Gerald Wellington could make a return to face Liberty on Sunday. Photograph: Hearts of Oak official website

By Akyereko Frimpong Manson
Follow Akyereko on Twitter: @ Akyereko
Ghana Premier League giants Hearts of Oak will be without influential midfielder Kofi Abanga for their short trip to face Liberty Professionals but attacker Gerald Wellington could return from injury.

Abanga, the longest serving player in the Phobians midfield, was forced off by injury in their 2-1 victory over AshGold at the Accra Sport Stadium as he could not return to play in the second half.

The 26-year-old joins captain Moro Abubakar, Obed Ansah and Thomas Abbey who are all on long-term injury-list.

However, attacker Gerald Wellington could pass a late fitness test to play against Liberty. Gerald, who replaced Abanga before restart of the AshGold game, also suffered what appeared to be groin injury and was replaced but has could still play part of the game for Hearts as he insists his injury is not as serious.

Midfielder Emmanuel Hayford also trained on Friday but the timing was too short for Mohammed Polo to select the talented midfielder for the game.

Hayford suffered a shifted neckbone during Hearts's 2-1 loss at Medeama three weeks ago after a rugby-tackle by Kabiru Moro and needed a quick medical attention.

However the Phobians have the articulate Winful Cobbinah back as he played in their last three games and Polo will be counting on him as his side seek a double over Liberty this season.

Eric Kumi and Robin Gnagne struck twice to help Hearts cruise to a 2-0 victory. The tie also favours the Phobians as they have not tasted defeated against their cross-city rivals since March 2012. Hearts have won all of the three subsequent clashes and scoring 7 goals in the process and conceding just once.