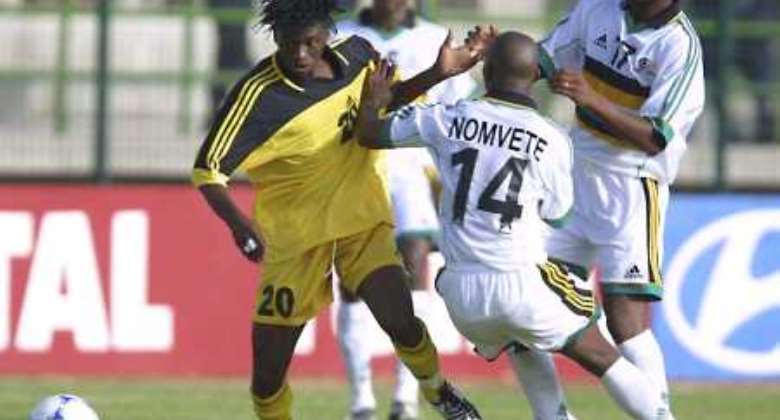 Yet, as South African soccer fans would expect, he was confident his team could negotiate their way to the top of the group to qualify for the finals in Germany.

And he's also fully aware his holding on to his job depends on them achieving just that.

While it could have been a lot worse, Group 4 - also containing Ghana, Burkina Faso, Uganda, the Democratic Republic of Congo and the Cape Verde Islands - is one Bafana would be expected to have the beating of.

Only group winners go through to Germany 2006, while the top three finishers in each group qualify automatically for that year's African Nations Cup in Egypt.

While Baxter fancies his side's chances, he singles out Ghana as probably the most difficult proposition.

"I don't know much about the Cape Verde Islands. Who does? But I am pleased that we have them first up at home (on the weekend of June 5/6). I'm hoping the boys' adrenalin will be pumping and they will be up for it.

"It's an interesting and challenging group, but if we play professionally and prepare well, I think we've got a good chance."

While he might not know much about the Cape Verde at present, one expects he will soon enough rectify that as he stressed that Bafana won't be going blind into any game.

"I've done video analysis of Bafana games before I came out here, and we'll also be using video analysis to assess our opponents. Short movies will be made for each player to look at. We won't go into any game without prior knowledge of our opponents," said Baxter.

By way of preparation, he will over the next few days conduct two training camps, one in Europe for Bafana's overseas-based players and another in South Africa for locals, so as to establish a "broad and deep pool of players" for the demanding task ahead.

He is also hoping to play at least one friendly before the qualifying campaign starts, with Scotland touted as possible opponents.

"I've spoken to (Scotland coach) Berti Vogts. That's one option we have if the date's suitable to us," said Baxter.

The unprecedented media interest generated by yesterday's news conference must have given him a clear indication of the magnitude of the task at hand. He already knows there's only one way of ensuring acceptance.

"It's a great challenge. I am a football coach, and I'm old and ugly enough to know that if you don't win matches, you can talk about long term, but you won't be in the job long term.

"My main priority is to win some matches. That's the name of the game. If I do well, give me a pat on the back; if I don't, I know what I'll get," said Baxter.

He said he had spoken "at length" to Real Madrid coach Carlos Queiroz about the perils of the Bafana job. That must have been an interesting conversation.

"Carlos was complimentary about a lot of things and said it could be a very rewarding job," revealed Baxter, adding that Queiroz also warned him "it could be hell on the same day".

Let's commend Bagbin for his tenacity, firmness during 2022 ...
39 minutes ago