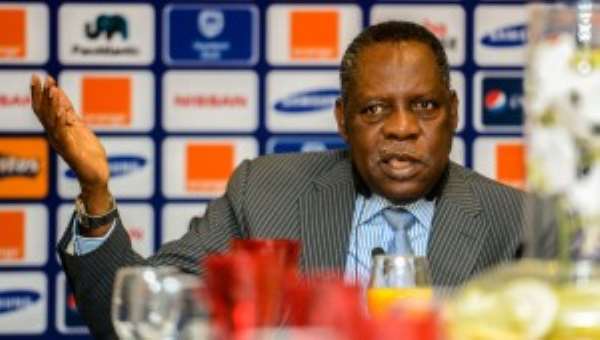 The President of the Confederation of African Football (CAF), Issa Hayatou, will on Friday play host to Ghana FA president Kwesi Nyantakyi in Cairo over the Black Stars preparation for the World Cup.

Hayatou has lined up a meeting with leaders of all the five countries representing Africa at the World Cup in June as he seeks to boost their confidence before the tournament in Brazil.

According to Kickoffnigeria, the African football supermo has invited Nyantakyi along with the Presidents of the four other Federations whose national teams will be representing the continent at this summer's FIFA World Cup, to the special meeting in the Egyptian capital.

Hayatou is expected to task Nyantakyi and his four other counterparts from Algeria, Cameroun, Ghana and Ivory Coast on their teams' preparations for the big event which is scheduled to take place between June 12 and July 13.

No African team has made it to the semi-finals of the Fifa World Cup in the past 19 editions.

Only Cameroon, in Italy in 1990, Senegal, in Korea/Japan in 2002, and Ghana, in South Africa in 2010, have flown Africa's flag into the last eight of the Fifa World Cup, with Cameroon narrowly beaten by England in 1990 and Senegal eliminated by Turkey in Japan 12 years later.

Ghana lost to Uruguay four years ago.
Nigeria, the reigning champions of Africa play two-time winners Argentina, Bosnia-Hercegovina and Iran in Group F, with Algeria up against Belgium, Russia and Korea Republic in Group H and Ghana to face Germany, Portugal and USA in Group G.

Cameroon tackle Brazil, Croatia and Mexico in Group A and Cote d'Ivoire are up against Colombia, Greece and Japan in Group C.

Ibrahim Mahama is not drinking tea with Owusu Bempah; Ghc107...
17 minutes ago

Govt will not purchase covid-19 vaccines to kill people — Dr...
36 minutes ago