Asante Kotoko – From grace to grass in Africa 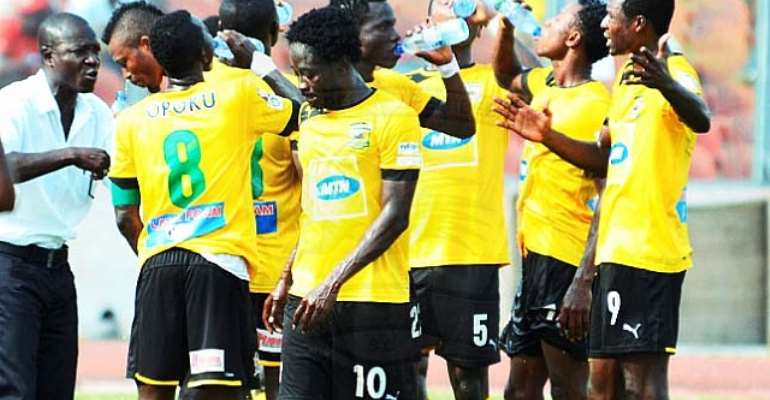 By Thomas Freeman Yeboah
Kumasi Asante Kotoko have lost their magic touch on the continent. Why should disgrace befall a club that shook every city they visited with good football, which earned them the African club of the century?

After the board and management of the club took the  giant step of putting in place an African Cup Committee chaired by Alhaji Lamini, with the acting General  Manager of the club  Samuel Opoku  Nti, and the renowned former Bayern Munich and Black Stars defender Samuel Kuffour on the committee, many fans thought a new chapter had been opened in the club and the former kings of African continent were on their way to stardom once again.

No one would have believed if even a soothsayer had predicted elimination to new fangled Barracks Young Controllers of Liberia in the first round of the contest.

Things looked well prior to the clash; because Kotoko produced 8 players in the Ghana team that went unbeaten in the African Nations  Championship (CHAN) in South Africa, but eventually lost the final on penalties to Libya.

The Liberian giants were very optimistic of taking out Kotoko from the competition with President Prof. Sekou Konneh predicting a rewrite of football history and they have lived up to their word.

It is a sad fall from grace for  Kotoko as their glorious past moves farther and farther away. They were the first Ghanaian club to reach the Champions' Cup final, now the CAF Champions League, in 1967 and they lost the final in the infamous toss of coin incident, and after they protested, CAF rescheduled the final, but GAFA (now GFA) failed to inform them, hence Englebert were crowned champions

Kotoko finally ruled the African continent in the 1970 edition, but the final was played in January 1971 by beating Englebert 2-1 in Kinshasa, Congo, after drawing 1-1 home in Kumasi.

This was followed with another final against Canon Yaounde and once again they lost in a controversial decision. Kotoko won the  first leg in Kumasi by 3-0, but prior to the 2nd leg in Cameroon, CAF came out with a new rule that the winner will now be decided on points not on goals aggregate , as done earlier in the competition, and Kotoko lost 2-0, hence CAF fixed a playoff on a neutral soil.

In the playoff, Yaounde scored first but Kotoko's equalizing goal was disallowed and they got another goal and once again the referee disallowed it . This triggered the defending champion to boycott the final.

The Porcupine Warriors made another giant step into the final in 1973 by beating AS Vita club of Congo Kinshasa 4-2, but they lost the second leg 3-0

Kotoko had to wait for 9 years before making their fifth final in the Champions Cup in 1982 and El Ahly (Nationale) in their debut final beat the Ghanaian giant 4-1 on aggregate having won  3-0 in Cairo and drew 1-1 in Kumasi.

The 'Kum apem a apem be ba' boys had a sweet revenge in 1983 against nationale of Egypt by drawing 0-0 in Cairo, before piping them through Opoku Nti's goal in Ghana to win their 2nd final in 6 attempts.

It took 10 years for the Ghanaian giant to reach the final of the Champions Cup, but lost to Zamalek on penalties after both home and away matches ended in a draw.

Kotoko were the club with most Champions Cup (Champions league) finalists and it took more than a decade for El Ahly to surpass them.

So what happened after these glorious moments because for more than two decades the club that was crowned the African club of the century by the International Federation of Football History and Statistics (IFFHS), who based their calculation on points built in Africa in the 20th century, have failed to reach the final of the elite African club competition, the CAF Champions League.

They have only relegated themselves to the final of the Cup Winners Cup in 2002 and the CAF Confederation Cup in 2004 but lost both final.

The big question is, can Kotoko resurrect from this big fall to bring back their glorious moments?