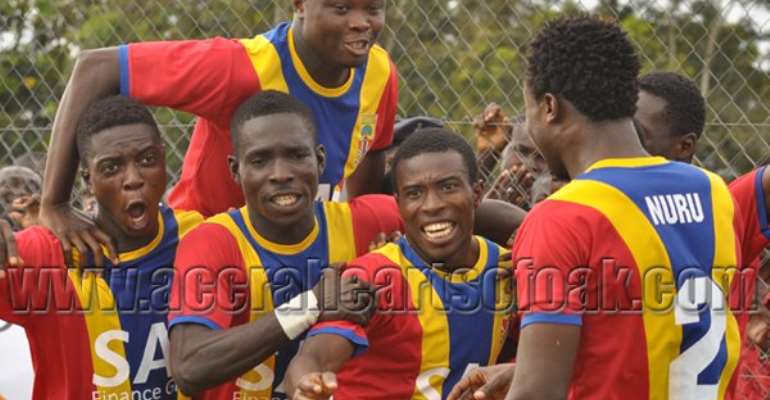 By Akyereko Frimpong Manson
Follow Akyereko on Twitter: @ Akyereko
Hearts of Oak eased themselves out of pressure after running away with a narrow 1-0 win over Aduana Stars at the Agyeman-Gyawu Park in the First Capital Plus Ghana Premier League on Saturday.

Youngster Eric Kumi brilliantly finished off an intelligent move initiated by Emmanuel Hayford in the 54th minute to settle the game for the Phobians.

Hearts went into the game without victory since first day of December when they beat Dwarfs at the Robert Mensah Sports Stadium and the pressure became immense when Wa All Stars posted a 3-0 defeat at the Accra Sports Stadium.

Trainer Mohammed Polo made a significant alteration to his squad as he left full-back Kwaku Andoh on the bench but had Winful Cobbinah, Emmanuel Hayford and Romeo Agban in his line-up.

Aduana started two of Ghana's 2014 CHAN stars Stephen Adams and Godfred Saka but their impact was limited except two exceptional free-kicks from Saka which were stopped by Philemon McCarthy.

Hearts maintained total dominance of the midfield and created more and more scoring chances but their dominance was sterile in the entire first-half until after the break.

Cobbinah laid a through pass for Hayford close to the hour mark and the former Amidaus Professionals midfielder laced through the Aduana backline with great confidence and located Kumi who timed himself rightly to bury his effort home for the game's only goal.

After the opening goal, Aduana tried to push men forward but Hearts who had a hold of the whip in midfield pressed and created more dangerous moments for their host.

The introduction of winger Ollenu Ashitey was a bigger headache in disguise as the skilful attacker caused more problems with his nimble foot and extraordinary energy.

The few times Aduana breached the Hearts backline, there was Philemon McCarthy to rescue them. The Phobians move temporarily to second place with 30 points.

Ibrahim Mahama is not drinking tea with Owusu Bempah; Ghc107...
57 minutes ago