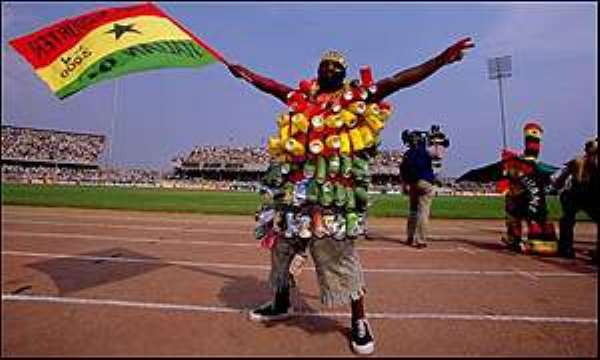 Kumasi, March 28, GNA - Ghana's Black Meteors qualified for the Athens Olympics when they beat their Zambian counterparts, the Young Chipolopolo 2-0 in their crucial deciding football match played at the Kumasi Sports Stadium on Sunday. Ghana and Zambia were tied at the top spot in Group D but with Zambia ahead on superior goal aggregate.

Two goals in each half from Abubakari Yahuza in the 21st minute and Kwadwo Poku in the 80th minute were what Ghana needed to qualify for the competition. Playing before a capacity crowd and in an electrifying atmosphere, the Meteors settled down to good football and in the seventh minute, Abass Inusah's connection in the visitors' goal area sailed over the bar. The Zambians, however, countered and in the 10th minute came close to scoring but wasted the chance.

The Zambians who did not hide their intention to win the match even before the game came on, nearly caused an upset two minutes later when they caught the Meteors defence flat footed but the chance was ruled off side. With a water - tight defence of the Zambians, the Meteors found it difficult to penetrate and had to wait until the 21st minute when enterprising Yahuza broke the deadlock with a terrific goal.

The Meteors earned a free kick outside the Zambian penalty box and Charles Taylor flipped the ball to Isaac Boakye who laid an intelligent pass unto the path of Yahuza who blasted home for the opener. The Zambians resorted to robust tackling and in the 35th minute, Yakubu the goal scorer was carried off the field when he was hacked down. Isaac Boakye had a glorious opportunity to increase the Meteors tally in the 45th minute but with an open net after the goalkeeper had mistimed a ball, he wasted too much time and allowed the Zambian defence to cover up before eventually shooting against a defender.

Determined to atone for his earlier miss, Boakye lobbed the ball over goalkeeper Kakonje Kalililo in the 49th minute but the ball sailed over the bar. The Meteors who were slightly on top at this stage kept probing for more goals and in the 55th minute, enterprising Yahuza shot straight into the safe hands of goalkeeper Kalililo.

Kwadwo Poku replaced Isaac Boakye in the 56th minute and four minutes later, Charles Taylor was pulled out for Lamine Nasir but this change seemed not to go down well with the fans. They expressed their dissatisfaction when a few minutes after coach Marieno Barreto got up to issue instructions to the players he was greeted with boos and he quickly sat down. The fans wondered why Taylor who was leading the Meteors attack after the substitution of Boakye should also be substituted for the young Nasir who admittedly was not very robust for the type of game the Zambians were playing.

So when at certain stages of the game, the midfield of the Meteors seemed to have crumbled and the attack could not click and the fans were clearly not happy and blamed the situation on the changes made. In the 64th minute, the Zambian technical bench sent in Christopher Katongo for Noel Nwandila and again pulled out Stephen Kunoah for Songwe Chalwe in the 70th minute.

The Zambians then put the Meteors under severe pressure, taking complete control of the midfield and piled on pressure in a bid to equalise but the Meteors defence soaked all the pressure and managed to weather the threat. The Meteors, however, in a swift counter attack in the 80th minute, saw Kwadwo Poku put the Zambians beyond recovery when he lobbed the ball over the head of goalkeeper Kalililo to send the over-expectant fans into a frenzy.

In a bid to get at least a goal, the Zambians made a last minute substitution, sending in Felix Katongo for Nwewa Nwewa in the 82nd minute while the Meteors also pulled out Razak Pimpong for Razak Ibrahim in the 89th minute.

We'll discipline you for early campaign to unseat NDC MPs – ...
11 minutes ago