No Live Transmission For Zambians 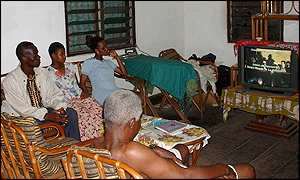 ZNBC programmes director Ben Kangwa said the corporation had only received one offer from Goman Advertising to screen the game but on condition that counterpart funding was sourced elsewhere for the exercise.

Kangwa said it was unfortunate that no business houses had offered to facilitate transmission of the all-important game in which Zambia only needed a draw to qualify for the Athens Games billed for August this year.

"We are unable to carry the game live because no sponsors came forth to sponsor the game. We sent out letters to the business community to assist us but only one company came through.

"Even as ZNBC we realise how important this game is but it's just that we are unable to televise it. We needed a colossal amount," said Kangwa who declined to reveal how much was required.

He said with only one company expressing interest by yesterday, it was difficult for ZNBC to book space on the satellite which was supposed to be done 48 hours before the game.

Kangwa thanked Goman for coming forward and urged the company to remain available next time another assignment came up and that other business houses must emulate the advertising firm.

He apologised to the soccer-mad fans who were hoping to watch the game to have a clear picture of what transpires in Kumasi to avoid speculation like the Benin debacle where Zambian players were alleged to have been mistreated.

But some fans spoken to challenged ZNBC to go ahead and screen the game charging that the national broadcaster had collected enough money from TV licences.

"As sponsors, we want them to televise the game. How much have they gathered from the TV licences. We can't continue paying them and yet they can't show what we want," said two disappointed fans who only identified themselves as Chris and Mulinda.